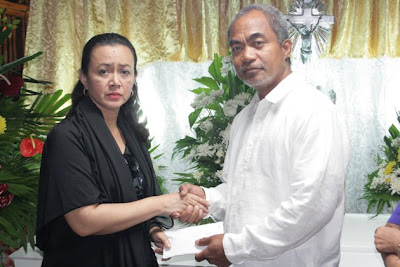 The way we regard our own doesn't always equal the way we regard the foreign born: how often we discriminate against ourselves. Filmmaker Loy Arcenas continues to impress and delight -- this time with such themes as xenomania, and double social and moral standards. No sophomore slump here. A new and rich vein, in fact, has opened up for him. Gone for now is the lyric mode inherent in his debut, Niño. Gone for the moment is the serious and solemn tone. In its place is the ludic and ironic side of a versatile film practice. REquieme! demonstrates a more frolicsome bent, a more inclusive reach with its searing portrayal of the addled Filipino psyche.

There is much to appreciate here: the wealth of relevant themes and the way Arcenas weaves, intercuts and translates them into his own brand of black comedy. There is a temptation to go for broke and swing for the fences, but the director shows maturity in depicting his ludicrous observations with such assured judgment that the wry sense of humor does not come across as mean-spirited or off-putting. He skewers them all, though he is more composed than scattershot: our operatic grief, our sacralization of the dead, and our irreverence to all things that spout out of us like so much stream of consciousness, emphasizing a wildly verbal culture.

REquieme! is irreverent but not done in bad taste. Arcenas brand of black humor here supports the soap box for four deaths, and two funerals, those twin themes of death and lamentation. Our supposed reverence for the dead is given an uproarious roller-coaster ride with a televised saga of a corpse being mistakenly transported elsewhere around the world -- from Riyadh to Rome to Hawaii – to much dismay and mourning of his family. Then such lack of reverence  finds wry expression in how a dead man is given two funerals. Elsewhere another of the corpses gets held up interminably by red tape and rigid bureaucrats.

But just as paramount to REquieme!’s concerns is its commentary on the discrimination against unconventional sexuality. Surprisingly it is also the film's heart. At the center of the film, after all, is Joanna, a would-be transgender who, after running away from his homophobic home, has found a new identity and a semblance of family. When one of his surrogate kin dies, he goes to the extremes of giving him a decent burial. Meanwhile, Swanie, his estranged mother and a barangay captain, is trying to make a show of grief and translate the death of his distant Filipino-American nephew Adolfo Payapa – the notorious killer of a famous fashion designer – into electoral victory.

What makes us infamously tick as a people, Arcenas seems to know by instinct. And he is learning well, openly taking a page from another accomplished satirist, Dennis Marasigan (director of Vox Populi), who gets a famous nod here. REquieme! keeps it refreshingly current owing to its strong sense of our fundamental social and cultural weaknesses, although it is clearly inspired by the life and death of Andrew Cunanan and his murder of fashion designer Gianni Versace in 1997.

Whatever the case, the viewer is apt to be surprised with shock after shock of self-recognition. Just as much, the moments of the collective mentality are bound to be telling: the second-guessing and kibitzing as communities gather around television sets, radios, and funerals. Arcenas transmutes these moments of the Filipino psyche with a keen sense of humor and irony. They never feel crass or perverse, only that the sociology of a people is spot-on and so pitch-perfect that our only rejoinder is laughter, a nodding, knowing  laughter.
Posted by Noli Manaig at 9:28 AM