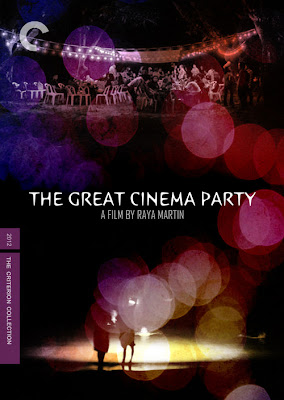 Unfortunately, Raya Martin’s Great Cinema Party represents one of the young director's most non-committal, most evasive works to date. Pity, there are plenty of missed opportunities here for the kind of committed statements we have come to expect from him. Perhaps, for once, he simply wanted to throw a party, and these are stolen outtakes from his personal archives that got into the wrong hands and were edited and passed off by some namesake. Maybe this is for the moment a sabbatical from all the fist-pumping post-colonialism we have pigeonholed him into. Nowhere in his cycle of faux-naif works -- from Indio Nacional to Independencia and even to the drug-addled Buenas Noches, Espana (the faux-naif tag is a misnomer but to me his works do convey a deceptive innocence that cushions their cogent historico-politico-cultural commitment) -- has he let up and relaxed his fierce Filipino Weltanschauung this much. This may be it, Raya Martin, the enfant terrible, in slacker mode.

The Great Cinema Party starts out, promisingly enough, with a silent 20-minute prologue consisting of snippets pieced together out of archival material and newsreels of the Second World War covering the fierce fighting on our own shores. We come to see all the horrors of the war, artillery firing, aerial strafing and dogfights, the Japanese, Filipino and American combatants, some of the many dead, and the bombardment and rubble of Manila. There is a frame or two shown upside down, as if to remind us of inadvertence, that this is the work of real people, of cameramen, of filmmakers. The rest of the visuals, however, passes without comment, as most of the movie disappointingly does. (There are precious few toeholds for us in the offing: too casual, too coy, too subtle, Martin is about to overestimate us.)

Ending this montage of newsreel footages in all its graphic glory is the superimposed image of Lav Diaz, a genie releasing us from the carnage and welcoming us, the audience, to the Great Cinema Party, with the promised attendance of Andrei Tarkovsky and Andre Bazin. The film then starts the celebratory itinerary on the island of Corregidor, that icon of Second World War resistance with its ruinous military bulwarks. Led around by that famous cicerone, Carlos Celdran, are youthful Caucasians, none of whom are recognizable but are supposed to be filmmakers. There is almost flippant curiosity here among these tourists, but thankfully there is refreshingly no solemn and sobering annotation on the war. However we are also left with next to nothing: the almost total absence of any historical comment seems to militate against the movie. Meanwhile, from concrete lookouts and battlements pop out heads of these tourists, a subtle attempt at levity. There is a moment when an unexplained explosion occurs in the distance while Celdran is making a point and this moment passes uncommented upon. What is that about? Fill in with your best conjecture. At nightfall, the tourists repair and dine at an ancestral mansion that houses cinematic artifacts from bygone times. The sometimes polite, sometimes flippant ignorance these guests show about our history and cinematic heritage is understandable but slightly disappointing.

Then the Great Cinema Party unfolds – and quite disappointingly as well. Everyone of note on the indie scene makes an appearance, from film directors to actors to critics, joining up with the Caucasian guests. Personally we see these indie luminaries often enough at festivals around town so the sight of them has all the frisson of seeing newly laundered clothes. Pleasant, but familiar. But here again missed opportunities abound. The cameos of these gathering celebrities are never parlayed into anything bigger. A comment by one of the assembled goes “I spend my salary on the Criterion Collection” and it comes across as banal and trite. Every cinephile makes such a claim. How about Second Run or Filmmuseum instead? The whole exercise of eating, drinking and exchanging banal comments turns into something, well, not so great. Nothing substantial comes out of it.

If Martin is making any profound statement at all, it whistles over my head. Things again are just too offhand and oversubtle. If Martin is making a comment about filmmakers as regular people, I don’t know. If Martin, instead, takes this gathering as that of a rare breed, I'm none the wiser. If Martin is making a grand comment about cinema as the last custodian of history -- both of them joined at the hip in a vital relationship -- he is bound to deny it. What then if Martin refuses to comment on the proceedings? We are compelled to take the exercise for what it is -- one big shindig, dedicated to cinema and history, its twin concerns. What is there to celebrate, though, if history remains unkind to us, if we -- as much as our Hollywood-shackled cinema -- remain, inextricably, in the death grip of a lingering post-colonial malaise and a blighted kind of neocolonialism? Everyone, meanwhile, seems blissfully oblivious, enjoying and celebrating themselves: their presence, shorn ironically of presence, seems so enough, so complacent, and so self-satisfied, that they are caught up in the fireworks of it all, in the supposed company of Tarkovsky and Bazin, in their own imagined glory, in one empty act of triumphalism.
Posted by Noli Manaig at 4:23 AM