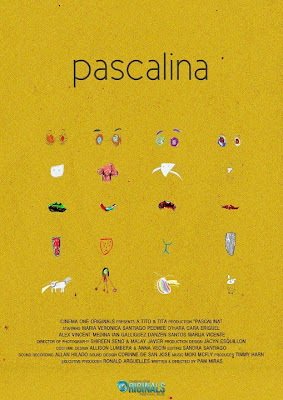 The more that I think about it, the more I see its parallels, at the narrative and character level, to a great Brazilian film, Suzana Amaral’s Hour of the Star. Each of these two films in question revolves around the story of a young, unprepossessing woman, each one seemingly out of place in an urban setting. Each of these two women -- Macabea in the Amaral classic and the eponym in Pam Miras' first feature-length film -- is portrayed with less than heroic traits: each socially awkward, each so inept at work that she faces the pink slip, each one so markedly plain and homely and each one oblivious to the treacheries and betrayals around her. Topping it off, each one’s destiny is about to be shaped by some form of supernatural agency.

But one quick disclaimer, Pascalina is no rip-off: all the foregoing simply serves as a testament to the happy coincidence of two kindred stories, the happy coincidence of two female doppelgangers whose independent conceptions may hint at their universality. However, it must be asked, is this possible universality rooted in the real world or, rather, the narrow cosmos of cinema, which tends to construct the female subject in a uniform and limited fashion, while it empowers, valorizes and privileges the male gaze? The latter is plausible: the patriarchal interpellation of both female directors under consideration is not inconceivable. Macabea and Pascalina, it must be noted, are characters curiously prone to the harm and depredation of the men around them, a sure sign, it would seem, of the loaded dice against them. But consider their outcomes: While Amaral's Macabea seems doomed to a fatalistic trajectory in her fatal innocence, influenced by the crossed signals of clairvoyance, Miras' Pascalina is, at the end, a passionate protagonist who transforms herself and determines her own unique female subjectivity albeit with the aid of vampirism.

Here is where I admit experiencing a sort of ambivalence towards Pascalina. That her transformation into an avenging, sanguinary aswang may on the surface represent a fate far better, more seductive than her modest beginnings  -- a weak, unassertive dupe -- but is that what is paramount? Pascalina’s triumph over her betrayer, and her redress of the wrong done to her, are laudable, proactive and grand gestures, the radical feminist may declare with euphimism, but Pascalina's acts are essentially murder and revenge, for the repossession of a man who may no longer be worthy. So what next, if the film proceeded for another 20 minutes? What becomes of Pascalina with her newfangled powers but with a tampered moral compass? Maybe negate the man, too, the other betrayer, the radical feminist or Pascalina herself may aver.

Pascalina, to add to my misgivings, seems to be in the business of feeding alive on the latter-day hipness of  vampires in movies and literature, it seems to bank on the coolness quotient of it all, perhaps even among the déclassé Twilight crowd, to lend legitimacy to the monstrosity Pascalina becomes by her acceptance of an evil familial heritage. Nihilism, amorality are cool, no? Mais, oui, since vampires aren’t human.

Another fly in the ointment is Pascalina’s overt subsistence on essentialism: Pascalina’s inability to resort to means other than an appropriation of her supernatural heirloom seems to confine her in a box – and the film seems unapologetic about it and frames her transformation as a reflexive, instinctual progression. In sum, Pascalina's man is a two-timing cheat, his lover, the other woman, is a temptress, and Pascalina, the aswang, is an inherently evil vampire, according to the film's essentialist schema. Men are men, women are women, aswangs are aswangs -- all in their worst inherent aspects and limitations, all deemed incapable to act and perform otherwise from the standpoint of abiding stereotypes, prejudices and folklore.

Maybe the colliding ambiguities are the point of it all -- consider once more the simultaneity of the feminist and anti-feminist slants within the film, consider the duality of  moral and amoral undertones that might seem equally justifiable -- and certainly that is better than the soul-emptying fare in theatres these days that cannot nourish. Maybe deep down I latently admire Pascalina as much as the legion that openly swears by it. Perhaps it’s enough for a film to create a character that takes no shit from anyone (Pascalina's mettle is ultimately that of an antihero -- but antiheroes are cool, aren’t they? After all, they are like you and me.), and in this dog-eat-dog world, no one should willingly want to be a push-over, a patsy, a doormat. Forget the beatitudes, the moral cliches, for a moment.

Perhaps what I will take away the most, what is bound to linger long with me at the very least, is Pascalina's gritty indelibility, its retro look, its washed-out colors, its betamax quality, all its primitive charm and simplicity that may speak more volumes than the latest 48-frames-per-second atrocity out of Hollywood. Just the look that seems to say this is no time for easy voyeurism. No sir  -- no sirs -- Pascalina will not oblige.This is not going to be pretty.