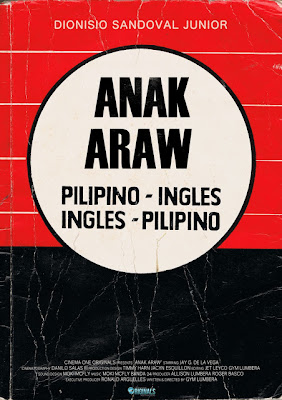 If words stood for pre-existing concepts then they would all have exact equivalents in meaning from one language to the next; but this is not true.

The value of culture (and therefore language) as an element of resistance to foreign domination lies in the fact that culture is the vigorous manifestation on the ideological or idealist plane of the physical and historical reality of the society that is dominated or to be dominated.

In Gym Lumbera's hauntingly fascinating but ultimately sorrowful Anak Araw, the Thomasites are long gone: it is apparently the 1950s, but the enduring residue of American occupation seems manifest through the institutionalization of English as a medium of instruction. The film, in monochrome, begins with a litany of English words flashed one by one like vignettes (a kind of Letras Y Figuras devoted to this foreign tongue) on the screen. Then the film segues to images of live animals -- the dog, the cow, the goat -- captioned in English, followed by their Tagalog equivalents, like entries in a English-Pilipino dictionary. Simple and rudimentary enough, as if this is for the purposes of a child's education. In truth, this is for everyone and the learning curve can be steep, excruciating and unnatural.

Full of whimsy, heart and humor, Lumbera intersperses proceedings with documentary footage of the well-attended funeral of Togo, one half of that Laurel and Hardy-like comedic tandem that flourished in the 1940s (to the despair of Japanese colonizers) and the early 1950s. Lumbera seems to associate this elegiac moment to the end of some prelapsarian golden age. Pugo and Togo after all were vaudevillians and movie comedians who entertained us in crisp vernacular. With them, a national three-ring circus lapsed into history.

But this could be simply misdirection, an objective-correlative about lost innocence. Lumbera is in the act of adding temporal textures and signposts. Meanwhile, his own staged footage is seamlessly period-like, what we might imagine of this era. Bringing us to an insular Tagalog hinterland -- haunting with its crepuscular lights and a shadowy overhang of bamboo and acacia trees and masses of people framed in the photographic manner of Robert Flaherty -- Lumbera dramatizes the hard and perhaps futile reception of English.

Each and every word for things, it seems, needs relearning. A displacement of one language has resulted in a kind of communicational tabula rasa in the new one. If De Saussure had come upon this, he would have declared that this island, and by extension a nation, had lost both langue (language) and parole (the everyday instances of that language), our signifiers (our words) and worse, our signified (the original concepts in our minds), in the confusing arbitrariness that relates two languages. De Saussure has noted how no two languages' vocabularies can have an easy one-to-one correspondence. Lumbera then imagines the meeting of languages as frictional and antithetical. So that in the act of attrition everything needs rechristening, a renaming of all things in the new, reigning language, like in Garcia Marquez’s Macondo, the similarly traumatized, amnesia-stricken backwoods in One Hundred Years of Solitude. Sometimes we are quick on the uptake, the cow is indeed a cow, sometimes the results are comical -- perhaps a deliberate act of native irreverence and rebellion? -- a crawling boy is captioned a goat.

Our languages, in truth, inscribe and reflect the cumulative traumas of historical violence. Taking this to heart, Lumbera goes one step further, as if to say that even the grand syntagm of cinema, his own, has been severely inflected and affected. We see it in the crisis of sound and image unfolding. We see how a mass of townsfolk, herd-like, reproduce the sounds of cattle or goats. (This moment of onomatopoeia -- which harkens to a people's pre-verbal purity -- might also be construed as the moment of collective resistance against the foreign tongue). Image does not correspond to sound. Cinema, as much as language, as much as any part of our cultural psyche, has not been spared.

The artistic and cinematic wherewithal of Lumbera is considerable -- delightful and refreshing in its post-modern bent. He seems intent to follow in the footsteps of Raya Martin (history) and John Torres (myth) in the way, for instance, they eschew conventional narratology. Anak Araw elides narrative, but can be described as impressionistically historical. Although diverse and poles apart, these directors share a distinctive and delightful cinematic felicity that is unmistakably theirs, what might be called a faux-naif ethos.  (Martin's Independencia, Torres's Ang Ninanais and Shireen Seno's Big Boy are examples of this seemingly-tangential-seemingly-innocuous but not-necessarily-uncommitted film practice, all elliptical in their post-coloniality.)

Already Lumbera has found entry points that he can mine – in this case, history by way of linguistics and perhaps semiotics. Besides his humorous linguistic juxtapositions and comical sound-image oxymorons, Lumbera also observes quiet but resonant moments that are the stuff of pure cinema. The patina of old, anthropological cinema is evoked and evocative. And he is no negligible student of sound, too, sometimes bravely foregrounding it to the exclusion of image. He punctuates, for instance, the end of the film with a black screen, and only the repetitive sound of a sputtering generator audible, refusing to jumpstart, a trope for the fits and starts of an abortive and benighted history.

Anak Araw demands close attention from the viewer, and even that may not  be enough; this review in itself is as speculative as this film’s methods. This film repeats our received notions of the past, but the director's fictive playfulness, his optical instincts, and the interdisciplinarity of his concerns and resources, mark him as a filmmaker to reckon with. Anak Araw sutures together fiction, history, found footage and even found audio, but the effect is not pastiche but surprisingly a work of considerable thematic unity. A found audio recording of an American crooner singing Dahil Sa Yo in a phonetic way to the rapturous delight of a Filipino audience is particularly noteworthy, a moment that speaks volumes about a people's addled mystique and his delusions of colonial kinship. Such are the latent and unenunciated joys of Anak Araw: short and sweet at around an hour but packs endless semantic power. Anak Araw, however, remains more connotative than denotative, more suggestive than literal. Anak Araw does not merely denote the albino, but connotes that inside-out chimera familiar to all of us, a chimera of historical genetics and identity, a chimera with dreams of America.

Email ThisBlogThis!Share to TwitterShare to FacebookShare to Pinterest
Labels: Cinema One 2012, Gym Lumbera