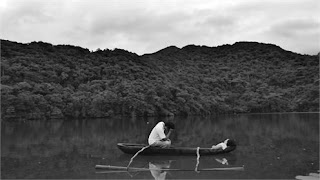 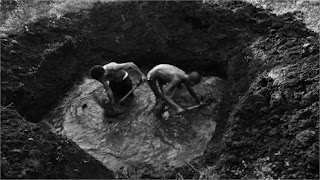 Florentina Hubaldo represents the Tess of the d’Urbervilles of Lav Diaz's emergent diegesis of Bicol. (Slowly but surely, he is constructing a cinematic geography around his native land -- the topography of Mayon Volcano is now all but trademark -- with works situated thereabouts like Death in the Land of Encantos and Agonistes). Like Thomas Hardy’s hard-luck heroine, every sort of misfortune has befallen the young Florentina. Florentina’s father is a savage beast, the embodiment of evil, brutally killing her mother, enslaving Florentina and prostituting her even before she has grown into full womanhood. Florentina is so violently banged up by her father that she suffers from chronic traumatic encephalopathy and, as a result, must constantly and traumatically remind herself of who she is. Any plan of an escape that she dreams of is often quashed by her father’s brutal and drunken omnipresence, her being continually chained to a bed, and an inutile grandfather, who discourages her with inexplicable fatalism. All circumstances conspire to doom Florentina to a tragic fate.

This story of agony seems to have been conceived by Lav Diaz as an amplification of an earlier 2-hour film entitled Agonistes, admittedly a rough draft, a work in progress, when it was shown a few years ago and had since been withdrawn from circulation. This lost piece of Diaz’s filmography has returned here and been refurbished to serve as a flipside to the fate of Florentina, a moral fable about two misguided poor souls desperately searching for lost treasure in the shadows of Mayon Volcano. Their desperation, they will soon realize, may not be so desperate vis-à-vis the tragedy of Florentina. Of late, Lav Diaz has favored the idea of mise en abyme, the idea of two or more disparate stories existing within a single film, acting like mirrors reflecting each other, producing supplementary or complementary reflections, or an amplification, whether through distortion or exaggeration, of its desired themes. This is evident here, as much as it is in last year’s magnum opus, Century of Birthing, with its intricate story-within-a-story structure.

On the surface, Lav Diaz's mature aesthetics remain intact. There is a handsomeness to the visuals here, a cleaner, less grainy and higher black-and-white contrast to the cinematography than we are accustomed to that suggests an upgrade of technological wherewithal. Florentina Hubaldo, however, also makes apparent its dramatic rawness, that it might also be a work in progress. The Cinemanila programme pegs the running time at 5 hours, but the version shown was nearly 6 hours long. This version of Florentina Hubaldo evinces scenes that lack artistic rigor and run obligatorily long. Long takes are Diaz's métier, only this time they feel like longueurs; a kind of tedium, from a sense of lacking narrative tension on the screen, overtook me, a kind of fatigue perhaps after having gladly sat through all of Diaz's lengthy mature works -- from Batang West Side to Century of Birthing. There is tightening at the editing end to be done.

Diaz also misjudges the ending of his film. Sacrilege to second-guess someone like Diaz, who knows a thing or two about narrative structures and storytelling to say the least, but the conclusion is pure anticlimax. Disappointing, since this is where he usually distinguishes himself, surcharged as he has often been with the most powerful, most unforgettably resonant epiphanies in film history to punctuate many of his masterworks. This is a 6-hour film without a pay-off, sadly. Between two choices – the fate of Florentina and her equally ill-fated daughter, on one hand, or the fate of the two treasure hunters on the other – Diaz has to choose wrongly.

Diaz merely repeats himself. The architectonic redundancy lies in concluding the film with Florentina’s eventual escape from the clutches of her father. No need at all: this particular detail by then has already been narrated and emphasized by the Good Samaritan – brother to one of the treasure hunters -- who would help Florentina and adopt her daughter. This anticlimactic ending takes up a better part of an hour and merely proves to be uneventful, interminable, and torturous -- not because of Florentina's symptomatic display of CTE, but because it is obligatory, and willfully repetitive in its purpose. To my mind, instead, there is some unfinished business in the fate of the two treasure hunters. Their search for treasure has only led to their discovery of an elusive and maddening gecko. There are possibilities left to explore there – the idea of a false, or a worthy, transcendental signified -- represented by the gecko, perhaps. What becomes of them? What is there for them to glean from their failures to find treasure and from the tragedy of Florentina? Is it enough to leave us with the ironically bourgeois rationale: the social and moral illusion that everyone, including these two desperate souls, should count themselves thankful for their lot in life, simply because there are human beings less fortunate than them like Florentina?

If Diaz's modest purpose is not a moral tale but pure, self-evident mimesis -- that is, a stark portrayal of evil and the unspeakable casualties it may cause -- Florentina Hubaldo is sufficient. It is patent and dramatic enough, even melodramatic. The sight of a discombobulated Florentina, reeling from CTE, repeating and repeating her name and her narration of her sob story is sufficiently effective. Yes, she will not be forgotten. Repetition ad infinitum can do that. Diaz's obsession with Dostoevsky's idea of evil shows itself again with the Karamazov patriarch, all vices and all hatefulness, finding expression in Florentina’s evil, incomprehensibly, inexplicably evil father. An exaggerated  reminder to all of us that such evil lurks in the world, that such unlucky, improbable creatures like Florentina Hubaldo and her daughter exist and can fall victim to it. All in all, Florentina Hubaldo, CTE is in any other auteur’s filmography a worthy addition, but coming at the heels of all of Diaz’s masterworks in the last 10 years or so, it is something of a letdown.
Posted by Noli Manaig at 12:36 AM