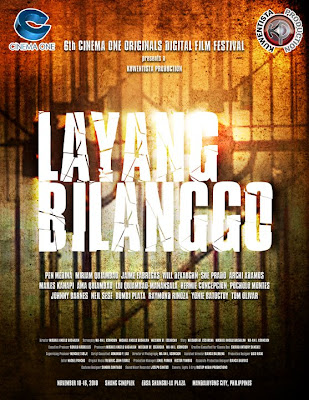 There may be much to admire in the early goings of Mike Dagñalan's Layang Bilanggo, but somewhere along the way the film loses it, irretrievably, and falls into the trap of indiscriminate inclusiveness. The first 10 or so minutes are a study in storytelling restraint and concision, an opening sequence that redounds to great directorial promise. First, we are given to witness an assassin’s pinpoint precision as he executes a hit. The film then cuts to a jail office where a journalist and the chief warden discuss rumors of prisoner-assassins. The warden hems and haws, clearly concealing the truth. Subsequently, we get the assassin's vantage, his double life in prison. In a few precise and penetrating scenes that reflect and lay bare the urgency of what it dramatizes, the film sets up an absorbing premise and introduces the disturbing reality of the prisoner-for-hire.

Prisoner-for-hire. That criminal mutation born out of extreme state impunity and corruption, on the payroll and protection of penitentiaries that are supposed to reform him. In Mike Dagñalan’s sophomore film, the focus falls on one such assassin named Paul, a man who is caught on the horns of a dilemma. He wants to turn his life around, but he is helpless. For him, there is no exit: middle-aged and all, he must keep on killing to remain useful to his sponsors, to whom the diminishment of his abilities might spell expendability. Death. His is a cheapened life whose fate is not his to decide.

There are two parallel strands that interweave to tell this man’s story. One strand traces his apparent past as an assassin who gets instructions from a warden named Adamos and a shadowy godfather. Even in the confines of such irregular circumstances, there are still other irregularities: power struggles among penitentiary officials, and machinations for his criminal services. Which is where the film starts to lose it. These sequences comprise some of the subplots that unnecessarily complicate the film, where a little narrative restraint would have been to the point.

The other strand of Paul’s story is his search for his daughter and his admission into Anawim, an institution for the aged. Here he is a curious presence. While the real denizens of Anawim grapple with dementia and second childhoods, Paul turns out fine portraits. We soon realize why he is here: why he noticeably has a close rapport with the home's art teacher. She is his abandoned daughter. He has found her. There is no outright reunion, but that doesn’t stop the film from approximating it. Suffice it to say: she soon calls him father.

Such is the suspect dramatic roundedness of Layang Bilanggo. Overplotted and fulsome, it is crammed full with all the melodramatic elements beloved to Filipino tastes. Listen to its twist-a-minute delights: The sad, elderly stories in Anawim. The alliance of a cop and a criminal. The formidable foe in a woman assassin. A father and daughter’s de facto, if momentary, reunion. The high-body-count finale: What more can a casual filmgoer want?

Quick eventfulness seems to be the filmmakers' overriding credo and Layang Bilanggo's ultimate undoing. The film, it turns out, credits four scriptwriters. Throw in a script consultant in the person of Bing Lao, who must have wielded little veto power, and you have the makings of an over-determined and overwritten story. Where a more direct expose on a disturbing criminal reality would have sufficed in making a powerful and unforgettable and relevant statement, Dagñalan stubbornly elects to tell a story chockful of popular and sensational action and drama. Layang Bilanggo may have romped off with the top prizes at the recent Cinema One Film Festival but it remains the work of a callow filmmaker. This is not yet Kubrador or Kinatay or Bakal Boys. This is glorified soap opera.

Email ThisBlogThis!Share to TwitterShare to FacebookShare to Pinterest
Labels: Cinema One Originals 2010, Mike Dagñalan, The Persistence of Vision