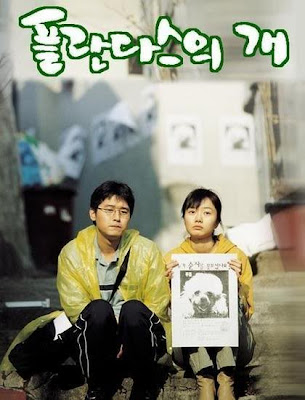 Eaten, beaten, kidnapped, murdered -- dogs seem to run the gamut of misfortunes in Bong Joon-ho's Barking Dogs Never Bite. Cruel? Moviegoer, take heart: with some strategic and judicious editing, Barking Dogs is a film that keeps animal cruelty to a minimum. Animals figure peripherally here. Man remains the primary subject. As a black comedy, it may barely qualify, despite what might be its potentially polemical imagery.

Writer-director Bong Joon-ho references the sorry plight of dogs in order to allegorize the abusive deeds of men towards fellow men. What we do to dogs is how we act at home, in the workplace, and in society in general. But Bong refrains from making didactic pronouncements. We simply get to watch characters made neurotic and psychically demoralized by depersonalizing forces in society. We learn of them almost by second hand: The government that shortchanges its retiring employees; the college dean who accepts bribes; the building contractors who have erected a substandard residential complex; the teachers who pay their way to better careers: all these supposedly respectable cornerstones of society.

Barking Dogs Never Bite mostly takes place in the aforementioned apartment complex. Yun-Ju, an assistant professor who is vacillating between doing nothing or bribing his way to full professorship, must also contend with his pregnant wife’s henpecking. There is also the nagging and incessant barking of a dog somewhere in the building. Locating it, he nervously goes about disposing it. He ends up stashing the dog in the building’s basement, where the maintenance man ultimately finds it, presumably butchers it and cooks it.

This touches off a series of canine disappearances, and the neighborhood soon blooms with posters of lost dogs. Hyun-Nam, a lowly bookkeeper who works for the city and who dreams of heroism, immediately investigates after witnessing a dog being thrown off a building. The heart of the film, she is closer to catching the culprit than she realizes.

If stereotypes are to be believed, Koreans are supposed to be redoubtable and fanatical dog-eaters. Dogs are allegedly brutalized in painful rituals before they are finally cooked. Fear and pain aroused in them, culinary superstition says, makes their meat a better, tastier delicacy. Barking Dogs hints at the popularity of dog-eating among Koreans, but does so in discreet and comical ways. But as good satires go, those who seem respectable are worse. Even then, director Bong never makes absolute moral judgments. His film concludes on a peaceful, lyrical note, as if to reconcile the world of good and evil.

What the film proves to be, meanwhile, is a story well and engagingly told. Bong’s narrative gifts draw on a good mix of genres: comedy, suspense and drama, all in calibrated doses. In succeeding films like Memories of Murder and The Host, Bong would go from strength to strength utilizing these self-same virtues: his visual and narrative ambidexterity allowing his films to defy categorization. Early in his career, he has demonstrated a maturity that few directors achieve in a lifetime. Memories of Murder may be his best so far, but Barking Dogs is a worthy feather in his cap.