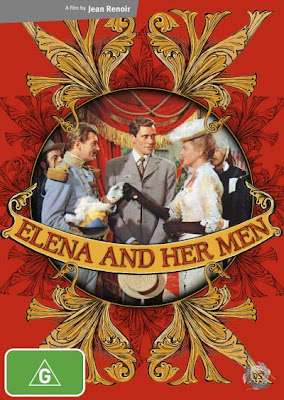 All Jean Renoir ever wanted to accomplish with the films he turned out in the mid-1950s was to get his feet wet again in the French film industry. After being forced into exile in America during the Second World War and directing in Hollywood, these were, for all intents and purposes, his comeback films. When all was said and done, however, the three films made in quick succession (The Golden Coach (1953), French Cancan (1954) and Elena and Her Men (1956)) coalesced together as though into a constellation, prompting film historians to bundle them together under the rubric of a trilogy. Running through them are similar threads that might not have been apparent even to Renoir: the director’s obsession with the theme of life-as-theater and the apotheosis of strong female characters.

Capping off this putative trilogy is Elena and Her Men, a grand pageant that’s part romantic comedy, part musical and part farce. Set in 1880’s France among the military brass during Bastille Day festivities, this Ingrid Bergman vehicle follows the sagging fortunes of a Polish princess in search of a suitable and wealthy husband to prop up her aristocratic family. What transpires, instead, is how personal idealism and involvement in politics might entail self-sacrifice in order to inspire a military general to the pinnacle of ambition, the seat of presidency. (For the Polish princess, it has the makings of a selfless act worthy of theater, a kind of performance that mirrors those of female leads in The Golden Coach and French Cancan.)

But there are many romantic permutations afoot, as the title suggests. When the story begins, she seems doomed to a cynical marriage of convenience to a shoe magnate, an old suitor to whom she thoughtlessly betroths herself. This shrewd businessman would ultimately leverage her feminine charms – and much more, it is hinted – in order to clinch a business deal with the military general who becomes smitten with her. Almost oblivious to her future husband’s shady manipulation of her, she nonetheless throws herself into the breach, egged on by the general’s approving think tank.

Among this advisorial committee of the general is an aristocratic bachelor who also has romantic designs on her, and shows his pure, even heroic, albeit often jealous, intentions by engaging potential rivals to duels, including the battle-tested general. His dynamic love propels him to perform wildly romantic gestures, mirroring the idealism and heroism of the princess.

Will she marry for love, for her political ideals, or for the security and practicality of it all?

Renoir revels in the improbability of this story, magnificently conjuring up the tumultuous ethos of the film’s locale. Rich and sumptuous colors go hand in hand with the festive atmosphere of its setting, no more apparent than in the street festivals and the period costumes. Adding to the beautiful chaos is the farcicality of the plot and its characters: a princess almost prostituting herself in her deep-felt political beliefs, a tycoon practically selling his wife to sweeten a business deal, an aristocrat doing a contortionist’s act of sorts to get the woman of his dreams. Watch it to see how all the engaging and entertaining twists finally come together. But this film leaves us, too, with an unflinching satire of military and political ambition, and how love can actuate the most grandiose gestures, how women might have more to do with man’s achievements and success than sheer inspiration.