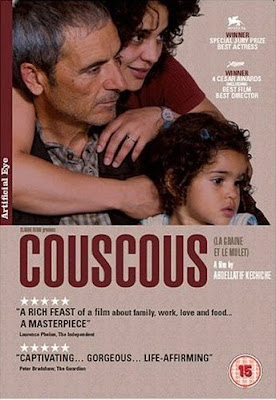 An old world is fast disappearing in the southern shores of France. Abdel Kechiche’s momentarily elegiac but ultimately celebratory The Secret of the Grain opens on this note of lamentation. Everywhere are signs of obsolescence and decay -- floating junk, rotten boats -- as the camera surveys the fast-changing harbor of Sete. We are listening to an unsentimental annotation of a tour guide about the transformation of this maritime corner on the Mediterranean. Gone is the fish crier, he says, the man who announces the day’s catch. He has been replaced by the mechanical proclamations of computers. Here to one side of the harbor are the mountains of detritus and scrap-iron of old factories. “There used to be ovens in France,” comments the guide, referring to the closure of heavy industries. As if to locate the displaced humans in this equation, he proceeds to describe the torturous, 3-month excursions of old tuna fishers to far-away oceans.

Surely this casual commentary is insufficiently convincing, so the camera cuts to the graying figure of Slimane, a faithful shipyard worker, to give these sad realities a human face. We see him just at the instant when he is summarily eased out of his 35-year job. Slimane is a throwback to the old concierge in Murnau’s The Last Laugh, made obsolete after years of faithful service. In stunned silence, Slimane accepts his fate, silently incredulous that an old, artisanal job such as his can find a quick and equally qualified replacement. The truth is, latter-day economics are striking roots and have made manual labor expendable and his services dispensable. We learn the other manifestations of this new but ruthless and cut-throat world order: the preference for new and illegal immigrants as the workforce where they are needed as they present fewer complications and more profit to employers. As commented on elsewhere in the film, the new capitalists are shifting to more lucrative and less-labor-intensive, post-industrial ventures.

This talk can be all densely suffocating for a 151-minute film and Kechiche shifts to less mechanic, more domestic gears, as he follows Slimane around. Taking his cue from Robert Guediguian’s sociological studies of the working class strata of Marseilles, writer-director Kechiche proceeds to documenting the daily lives of immigrant Arabs in this seaside town in southern France. But lest one forgets, some of the quasi-documentary feel must also derive from Kechiche’s previous film, L’Esquive. It’s a familiarity with this mode of filmmaking that allows him to trace the reticulations of the Arab immigration and assimilation with relative ease.

Whether observing the gatherings of Slimane’s former wife Souad and their four children, and the protective care the graying man receives from his new woman, Latifa, and her feisty daughter Rym, Kechiche never fails to introduce an underlying commentary on the broader picture. His prime narrative strategy is linguistic metaphor. Gathering to partake of a meal of couscous, their dialogue is very pointed and empathic in expounding, for instance, the subject of disposable diapers – a thinly-veiled allusion to the disposability of Slimane in the new economy. Another: Couscous, they remark meaningfully, is the product of love, a labor of love, meant to reference the human touch invested by old artisans.

As the film wears on, the accent soon falls on the family and its crucial role in many aspects of life, at least in Slimane's life. What starts out with the solitary, dour figure of this man soon gives way to a lively ensemble of his extended families and the Arab section of Sete. They may find it irresistible to talk behind Slimane’s back, but there is genuine solidarity originating in these tight-knit circles in his hour of need. The consequences of documentary closeness, however, are such that we are made to witness, for instance, the extra-marital indiscretions of his son Majid and the scene-stealing disaffection of his Russian wife, Julia. We don’t fail to listen to Rym, almost like Slimane’s surrogate daughter, as she defends the old man from his unfeeling sons and often acts as his mouthpiece.

Much of the film’s engaging and endearing payload, however, comes in the last section of the film, when Slimane undertakes a plan to turn an old, dilapidated ship into a couscous restaurant. There is gripping suspense in anticipating whether his efforts will come to fruition on his restaurant’s opening night. But The Secret of the Grain does not fixate on single-handed heroism. To be blunt about it, Slimane comes across as an almost pathetic, ineffectual persona, and there’s a literally breath-taking allusion to De Sica’s Bicycle Thief towards the film’s end that highlights this, as he tries to run after and retrieve a stolen motorcycle.

An allegory about solidarity and the communal values of an older world, The Secret of the Grain sees a sincere volunteerism and a closing of ranks at the film's crucial juncture. Perhaps meant as stabs at the patriarchal nature of Arab societies, many of the well-meaning acts are the gestures of women. Don’t fail to watch through to the end; multivalent and polyphonic, this film makes simultaneous points that are brought home at the conclusion. Full of carousing, music and belly-dancing, the suspenseful – have I used the word yet? -- ending rounds out a tale well-told. In a world fast metamorphosing and phasing out the need for human touch, there is hope in homespun goodness yet.