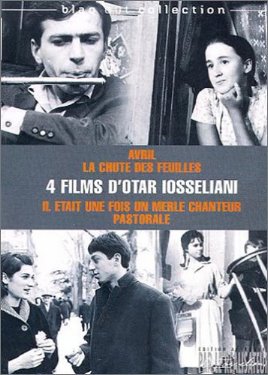 Director Otar Iosseliani, who takes up residence in Paris, France, originally hailed from Georgia, a former Soviet republic that boasts of a rich filmmaking tradition. Film  luminaries like Tengiz Abuladze, Mikhail Kalatozov and the Shengelaia brothers are products of this Transcaucasian country, the most advanced and sophisticated filmmaking  nation of all the former Soviet republics. Before trying his hand at directing films, Iosseliani was a painter and a professional musician. He studied film under the tutelage of the great Dovzhenko. From the start, his works inaugurated an uncompromising filmic style that ran afoul of the Soviet censors. After his first film, April, incurred official ire in 1961, many of his subsequent films would encounter similar displeasure from authorities. Three notable features, When Leaves Fall (1967), There Lived A Singing Blackbird (1970) and Pastorale (1976) marked the turning point for Iosseliani. These films garnered for the director an international reputation on the festival circuit, a development that convinced him to emigrate to Paris.

Iosseliani’s career as an expatriate is no less marked with distinction. Les Favoris de la Lune (1984) won him the 1984 Golden Lion at the Venice Festival. His other films continue his visual and stylistic trademark of often plotless narratives lensed with documentary-like observation. Although getting on in age, Iosseliani remains an active filmmaker, releasing films at a constant rate that has kept him at a high profile
among his growing ranks of followers.

Pastorale, the film under consideration, was never exhibited in the West until 1982. Like the film that preceded it (There Lived…), Pastorale was shelved by Soviet censors on account of its “formalist aesthetic.” That is to say, it was a film marked by stylistic experiments and obliqueness – infractions that were frowned upon by the State and those who still prefered films in the Socialist Realist vein.

There’s supreme irony underlying a title like this. Put it in the mouths of city-dwellers and it brings up the long-standing tension between the two poles of contemporary living. What might heighten this into animosity is that the story takes place in a socialist state, where the rural inhabitants are regimented into farm collectives, while their urban counterparts luxuriate in sophisticated and sedentary jobs. It’s a bitter blood feud waiting to happen.

Characters in Iosseliani’s universe, particularly in Pastorale, are no different. There is, however, a measure of civility – an uneasy truce founded on pragmatic grounds. The conflict runs just under the surface. Look closer: everyone seems to be in a bad mood in this film. There is an uneasy truce among the characters whose momentary juxtaposition makes for fragile configurations in which the figures put on tenuous smiles while trying to hide mutual contempt.

This is the Georgian countryside, after all, a neglected satellite of the Soviet empire, and the guests are city denizens trundling behind them gilt-edged orchestra instruments. Why these musicians have rusticated to this corner of marginalized peasants must owe to the image of serene rural settings where practicing their musical craft can be facilitated.

Immediately, the hosts become the butt of neighborhood jokes: the musicians are asked to play at lowly funerals, to be paid a pittance that befits their slight dexterities, something along those lines. This escalates as a prodigal son of the host household comes to visit from the city and carts away the best wine and meat – the hosts are far from pleased, to say the least.

The displeasure and the inconvenience felt by the peasant hosts come to a boil when a neighbor building a house next door presumes to install a window facing their courtyard. On a different day, the neighbors might condone this seeming act of communality (neighborliness even). They might even welcome it and encourage it. But patience seems to be running thin. In other words, this quibble over a little architectural nicety is overblown. Suffice it to say that the members of this household regret the fact that they have to

speak in undertones lest they bother the guests and their cold instrumentation.

There is a telling and trenchant image midway through the film when a truck carrying farmers, with their picks and shovels raised upright like arms, stop at a train intersection, giving right of way to a train carrying what appears to be well-heeled urban passengers: there are sombre and deadpan faces looking at each other from a kind of demarcation line. The sequence is incendiary, the metaphor of class conflict no better illustrated in any other film in memory.

Even the host family's teenage daughter, who initially seems to establish a genuine connection with his urban counterparts, is not spared the undercurrent of enmity. She plays their parlor games, takes them around the village and indulges all their whims. But soon she must also take up the shovel and join the collective of workers. In the end, she finds little affinity and affection for a phonograph record – a military march that is cavalierly chosen, to say the least -- left by the visitors.

Money, in the meantime, has changed hands.