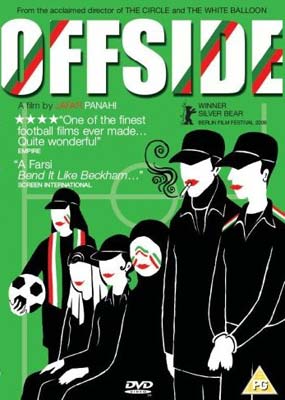 On the surface, Jafar Panahi's latest film, Offside, may zero in on sporting fanaticism, situated as it is among the heady throngs that passionately love and support football, but something else is in its crosshairs, what still obtains today in Iran as a forbidden brand of spectatorship. In fact, football stays mostly in the background in Panahi's scheme of things, skirting what would have certainly become yet another entry to the much-investigated phenomenon of football mania. The filmmaker instead follows around the distaff side, Iranian women, in a thinly-veiled exposition of their civil liberties -- or rather, the lack thereof -- choosing an unlikely but opportune time and place to do so: Iran's final game at the Azadi Stadium, against Bahrain, in a bid to qualify for the 2006 World Cup.

All roads lead to Azadi Stadium, a hallowed temple to the Iranian man’s worship of the sport in question. But this supposedly national pastime forbids women from watching at the stadium. (There are no comfort rooms for women in this edifice, a subject of a comic set piece along the way.) This proscription, however, is under siege, the subject of circumvention by women who are not doing it for political reasons but for the sheer love of the sport. At the stadium, however, it would take inordinate bravery to slip past security and scrutiny; ultimately several of these intrepid women are caught and herded to an enclosure within the stadium – within tantalizing earshot of the football match.

The impassioned dialogue between the youthful security men and the football-obsessed women that ensues forms the edifying and humorous core of the film. While trying to do their jobs, the security men nevertheless show vulnerability to be swayed from official position. The discourse is forthright for the women: what sort of baleful influence can be absorbed by watching a football game? Why is the accident of nationality and gender determinants of who can watch the game? Why, for instance, could Japanese women watch at the revered stadium? It’s street-level reasoning but it cuts to the heart of the matter. All the poor security men can offer is officialese and knee-jerk putdowns that demean women as worse than "cattle" for their recalcitrance. So when one of the girls manages to escape, it's a moment of great hilarity for the rest of the girls in custody.

We are judiciously never distracted even by snapshots of the football match. But instead we get all the zeal and excitement, the flag-waving passion and all the paraphernalia of worship and allegiance. For the delectation of the captive women, one of the obliging security men even volunteers a running commentary of the match. We witness the brand of enthusiasm and boisterousness of women, how perhaps Iranian women can be as fanatical – and therefore as human –  as Iranian men in their love of the sport.

This brand of women is shown as legion, coming from all walks of life, seemingly unafraid of the repercussions of their audacious act. It is the height of boldness that one of them dresses up as a military man and usurps the seat reserved for a high-ranking official. But in the din of celebrations in the streets, is it this easy to challenge and interrogate the patriarchy and theocracy that underlie Iranian society? It’s the mark of intelligent circumvention that such a serious social issue is addressed in a warm and funny comedy. The humor it offers goes down easily, while forwarding fundamental and commonsensical arguments not so easy to refute.