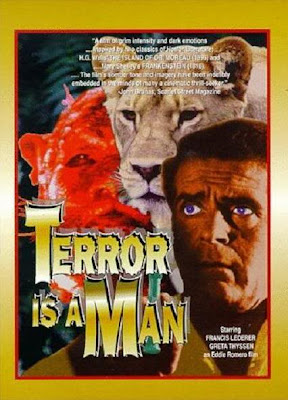 A taut and superbly crafted science fiction horror b-movie, Terror is A Man terrifies on an individual, reflexive level, with its visceral and psychological effects, as well as on a wider, macrocosmic level, with its frightful visions regarding renegade science. The title could not have been better chosen: it’s a resonant billing and advertising come-on rolled into one. Terror and man, in the hands of the future National Artist, Gerry de Leon, truly, surpassingly, equate.

For the purposes of the genre, there is the nominal beast of terror on the loose, while the true monster hides in plain sight, preens, man-like, in a dignified gown, on the foreground. This film revivifies and returns to the thematic concerns of Frankenstein and The Island of Dr. Moreau, among other models, as it skewers the arrogant anthropocentrism of man and the cold, inhuman methods of science.

A remote, misty and shadowy island off South America, the ominously named Blood Island, is the locus where terror reigns. De Leon conjures up an eerie and expressionist atmosphere with minimal fuss and minimal trappings, an island where a crazed scientist named Charles Girard rules with the sanction of science. Performing countless surgeries, transplants, and other disfiguring experiments on a panther, he seeks to bring about a new and improved species of man, a man without the burdens of unproductive emotions.

The film's monster of science, a furry biped midway between animal and man, follows a cardinal principle of horror: he is a monster kept, literally, under wraps for much of the film. In fact, he is never completely visible, always either drenched in shadows, or swaddled in layers of gauze. When he starts to wreak revenge, we are held breathless by what he does and inflicts more than what he must look under the bandages. When the islanders start to die, they flee en masse just as an American survivor of a shipwreck is washed onshore. What this newcomer, a man named William Fitzgerald, finds on the island are unwilling accomplices to the heedless experiments: Frances, Girard’s wife and unwilling nurse; Walter, the doctor’s minion who lusts after the doctor’s wife; and their native servants.

De Leon makes do with a shoestring budget and true poverty aesthetics. Filmed on location in Corregidor and Cavite and other parts of Luzon in the Philippines, with an able cast of mostly American actors, Terror is A Man was shot in grainy black-and-white with bare and spare settings and yet has the look and feel of a well-oiled Hollywood b-movie production. Filipino exploitation, in the form of other horror fare and women’s prison flicks, was still a decade or so away, but de Leon’s effort could very well have served as a prototype and template for those following in his footsteps.

At a time of over-heated debates worldwide about the possible pitfalls of genetic experimentation, Terror is A Man has the potential for a revival. With its eerie imagery of sadistic trial and error and unfeeling inflictions in the pursuit of knowledge and know-how, it packs a potent argument against the free, unregulated enterprise of scientific study. De Leon may be simply paying homage to literary classics by H.G. Wells and Shelley, but perhaps he had a strong prescience of technological and scientific dilemmas about to come, a prophecy that provides caution against man's boundless freedom.

Reviewed: September 24, 2010 (Northern Portrait/The Persistence of Vision)
Posted by Noli Manaig at 2:40 AM

Email ThisBlogThis!Share to TwitterShare to FacebookShare to Pinterest
Labels: Gerry de Leon, The Persistence of Vision