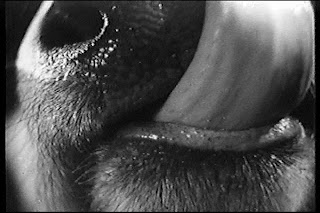 Long before world audiences sat up and took notice of such masterpieces as The Cranes Are Flying (1957) and I Am Cuba (1964), Mikhail Kalatozov was cutting cinematic teeth at the fringes of Soviet Union cinema as a creator of documentaries. His work was, literally, film practice at the margins, fashioning out pieces from his Georgian homeland, a satellite far-flung from Moscow and the hubs of the socialist empire. Salt for Svanetia, shot in the late 1920s, was one such documentary that should have announced him as a director to be reckoned with.


An early, important piece in the genre of ethnographic film, Salt for Svanetia employs the paradigm formulated by Robert Flaherty with Nanook of the North (1922) and antedates the thematic explorations of Luis Bunuel’s Las Hurdes (1933). The scenario that Kalatozov presents is a Soviet Union still in its infancy, consolidating and laying down the foundations of a new order. Kalatozov’s film provides a valuable if slightly fictionalized document that chronicles the hardscrabble life in Svanetia and the outskirts of the Ushkul region in the Caucasus Mountains just as socialization and modernization were at its doorstep.
Kalatozov draws on Flaherty’s example of recreating, and not exclusively observing, the pertinent social, economic and cultural goings-on in Svanetia. Very early on, it displays a prodigious signature that seems to owe a debt to his contemporary Eisenstein. This finds particular expression in distinctive stylization: the camera tilts obliquely and the subjects are endowed with unnatural expressions and postures; a stylistic sensibility that shaped I Am Cuba, made nearly 40 years later. 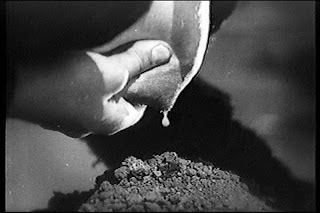 In the out-of-the-way regions of Svanetia, life is unrelentingly difficult. In the summers, marauding landowners from neighboring lands swoop down on the villages and take away what little they have. If not for sentinel towers, Svanetians are readily vulnerable targets with few defenses. In the winters, life is no less arduous. Barley and other crops are buried under snowfall, and must be prematurely harvested. Apropos of the title, what is most valuable to the villagers of Svanetia, however, is salt. It is particularly in short supply in winters, so scarce that menfolk must trek across the snowy slopes of treacherous, avalanche-prone mountains en route to remote civilization in order to obtain it.
Aside from the pointed jabs at a feudal backwardness, religion and superstition come in for critiques in Kalatozov’s documentary. In one telling episode towards the end, the happy moment of childbirth while someone is being buried is instead dramatized as a bad omen. Demonized almost as a witch, an expectant woman is turned out of the village, lelft to labor unattended in barren dirt. She gives birth, but the newborn is left to the tender mercies of nature: most poetitcally, a dog foraging for a salt lick. The image of this mother fertilizing her child’s grave with milk drawn straight from her breast is powerful and indelible. There are images, however, of happier moments of quiet dignity too; for instance, the array of uniquely shaggy hairstyles of Svanetians and the illustration of native self-sufficiency in how each artifact such as woolen clothes are hard-won and painstakingly produced. 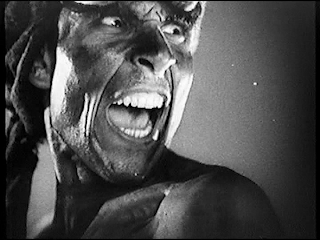 In 1936, Kalatozov would begin pursuing his craft outside his comfort zone and his Georgian roots. He would be equal to the job, although his efforts would seemingly pay off quite belatedly. In 1957, he would fashion, arguably, his best masterpiece, The Cranes Are Flying, an indictment of war that would go on to win the Golden Palm at Cannes. Seven years later, Kalatozov would craft another unqualified masterpiece in I Am Cuba, a paean to the newly socialized country of Cuba, bringing the filmmaker full circle to his documentary beginnings.
Posted by Noli Manaig at 3:06 AM