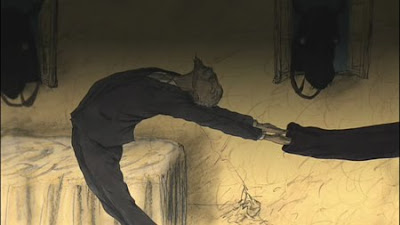 The true way is along a rope that is not crossed high in the air, but only just above the ground. It seems intended more to cause stumbling, rather than to be walked upon -- Franz Kafka. Lines of caution and despair, they provide the epigraph to this startling anime film, inspired by a Kafka short story of the same title. What director Koji Yamamura and his intrepid team of animators do well is take a spare and barebones story by the Czech writer and create a disturbingly oneiric vision of the world like no other.

A Country Doctor takes just over 20 minutes to accomplish its purpose, breathing life as it does into a brooding tale about the human condition. It opens, forebodingly, in a country doctor’s courtyard as he prepares to answer an emergency deep in the night. What complicates his impending journey is a snow blizzard sweeping through the terrain. To add to his woes, his horse has died during the cold, wintry hours. His servant girl Rosa tries to look for a replacement, knocking from door to door, but to no avail. But just as the country doctor starts to rue his luck, a groom comes out of nowhere with a pair of mysterious horses. The groom turns out to be a malicious figure who telegraphs his carnal intentions upon Rosa, alarming the country doctor just as he is about to leave. He has little time to react, it seems, as he is hurried off on his rig.

Arriving at the end of his journey, the country doctor is ushered to the sickbed of a boy , who whispers to him his intention to die. At first the country doctor finds nothing wrong with the child, no fever, no worrying symptom of any kind. But a wound in the boy’s side is revealed on closer inspection; the country doctor just missed it until it is hinted to him. It’s a festering wound, the size of a palm, full of wriggling worms. Stripped naked by the boy’s family, sung to, and made to keep a close vigil on the boy, the country doctor reassures his patient but escapes the sickroom as soon as the boy falls asleep. Naked and freezing on horseback, he rides blindly through icy snow and buffeting winds of the night.

This short précis of the film’s storyline follows Kafka’s prose with close exactitude. Even so, this anime gives free rein to the expansive imaginations of its animators. It’s a combination of story and execution that produces a film ripe with multivocal meanings. The country doctor, who at the end rushes homewards, or nowhere, through blizzards of snow, is plagued with various exigencies, but seems blindly cognizant of them, or chooses to remain ignorant. Neither does it seem probable for him to redeem his servant girl from the groom’s raging lust, nor will he see through his wounded patient’s crucial hours. What does the elusive wound represent? What does the doctor's undressing mean? Who is the groom? Does the country doctor stand, as critics claim, for the modern man too deadened to respond to the real emergencies of existence?

The beauty of Yamamura’s film lies not only in its unsettling story but in its visually gripping evocation of a dream world. Rendered in stark, monochromatic colors, both characters and context evoke surreal and expressionistic 2-d representations that complement its existential themes. The animation revels in modernist touches: distortions and elongations of human figures (faces, limbs and torsos), the elements, and the inanimate. This is all occasioned, it seems, by the particulars of Kafka’s story: the swirly, inky night, the driving snows, the worm-infested wound, the dream-like goings-on. Complemening it all is the ghostly presence of storytellers intoning like the narrators of a Noh play.

Yamamura’s A Country Doctor is a triumph of anime filmmaking that has to be seen to be appreciated and cherished. Without going overboard, it takes here and there, successfully synthesizing all manner of influences: from Frederic Back to Yuri Norstein, from Die Brucke to German Expressionism. Rarely do we encounter adaptations that do justice to their sources. A Country Doctor has the distinction of surpassing its basis, Kafka be damned.