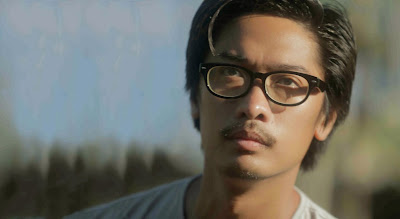 Hitler, however, was a painter too.

What I regret most about this documentary is how it sanctifies Jose Maria Sison as a trans-historical hero, and how it attempts to foist this on us with selective memory. Reenacting the anecdotes of an interview conducted recently by the Dalenas, The Guerilla is A Poet is the apparent meandering of memory, hither and thither, without dramatic structure and logic, only with a view towards glorious apotheosis. Never in doubt a hero, as wide-eyed reverence goes, it shows Sison from an early age already made aware of his feudalistic family's land grabbing and as a young man already fully formed laying the groundwork for the New People’s Army, to his becoming monument to the Communist Party of the Philippines.

What is regrettable is the man of marble, a portrait that verges on the cult of personality, warts and all simply omitted, along with the thick accretion of crimes barnacled around him. What is regrettable is how throughout its duration of 2 and a half hours, this itinerant documentary fails to meet head-on much of the supposed apocrypha, but generously allocates time for Sison's height of popularity and heroics, his martyred coevals, even his famous contemporaries like Ninoy Aquino, as if to gloat over his own iconic status, while remaining silent on the more urgent issues raised against his past.

It is most exigent that this film wax enthusiastic not just about Amado Guerrero (Sison's pseudonym) and his poetic side, but about the negation of his perceived dark side, his putative ruthlessness, as a revolutionary leader. In recent decades, his image has undergone an all but total eclipse and this film, an overlong non-sequitur, strains to be his rejoinder. Sometime in 2006, snapshots of him exposed him dancing cheek-by-jowl with actress Ara Mina in a Christmas shindig in the Netherlands, as if captioned to question his lifestyle while in exile, whether his vow of solidarity with those still fighting in the hills of his country is an earnest one. But that is the least of his worries. For one he has been charged with the indiscriminate purging of the New People's Army in the 1980s, to root out deep penetration agents, but at the expense of thousands of innocents. He has disavowed any role in it, but there remains the allegation, too, of his having a hand in the assassinations of former NPA commanders in the early 2000s like Arturo Tabara and Romulo Kintanar, who were his vocal enemies and dissenters.

The Dalenas seem to tiptoe around the Sisons here, careful to ask sanitized questions and teasing out romantic displays of heroism and comradeship, poetry and song. Was this a documentary ever meant to be an objective one? Doubtful,  given that some of its collaborators -- a couple of actors here, a script writer there -- are recognizable partisans from the Left. If the crimes alleged against Sison are all part of black propaganda – perhaps by the state or by Sison’s enemies within the movement -- The Guerilla is A Poet is tantamount to an instance of revisionism and vanity press. Here there is an attempt at an iconic rehabilitation and restoration. His only crime, the movie deigns, is how he would obliviously forget his children and leave them unattended, all the while typing away committed literature and poetry. A slap on the wrist, while foregrounding the romantic zealousness of his passion as a man of letters. All venial sins, if at all, as opposed to the alleged mortal sins the movie should be investigating. The one imputation against Sison that he deigns to confront here is his widely believed responsibility in the Plaza Miranda Bombing, an accusation shared even by the irreproachable Senator Jovito Salonga. Sison deflects it and fingers the  convenient suspect: then-President Marcos. Easy out, of course. End of story.

Interminable at a full 2 ½ hours, a time that should have been more than enough to answer all the rumors swirling around the man, what we get is digression and detour. Amorphous, there is no rhyme or reason, no dramatic arc to be gleaned, just anecdotes stitched together in an incoherent skein, with an occasional, intermittent line from Sison that makes us wonder about the veracity or fictiveness of what is being portrayed. What we get are relatively unimportant subplots and figures like Major Aure, the fearsome military torturer accompanied with portentous music, and Ka Teresa, the beautiful revolutionary and her equally doomed revolutionary husband. We are never certain about their facticity: most probably enthusiastic evocations of legends known in Communist lore. Simply, none of the hard questions get asked, not even a great deal of the man and his wife’s life in the Hague is touched upon.

What we are made to appreciate is a heroic man of commitment, the firebrand of the revolution, the writer of the supposed “bible of the Communist Party”. How he has risked his rights as an enemy of the state, how he has risked his freedom as a fugitive, how he has risked his life crossing treacherous terrain, mountains and rivers, while finding time by the flickering light of a kerosene lamp to create poetry in the middle of the night in the middle of the woods. All romantic, superlative stuff. There are several moments about the nature of life in the hills and in the armed struggle -- in particular the parity between female and male revolutionaries when it comes to love -- that sometimes prove interesting, but they come few and far between, amid the obligatory portrayals of fist pumping, intoning of committed slogans, revolutionary/Communist rhetoric and the singing of the Internationale and songs of protest.

Even as this movie plays in major theaters across the capital to the enthusiastic slumming of bourgeois audiences, the mysterious deaths of Sison's opponents remain unsolved. It is said that a series of fatwas still remains in force against the man’s enemies within the movement. If you saw this movie without knowledge of his alleged past, you would never suspect the man of any evil and wrongdoing. You might even swoon over this idealized man who can wield the armalite as well as the writing pen. There is a scene here that encapsulates the thrust of the film: Jose Ma. Sison waxing eloquent with revolutionary tirade as he, even under military custody, confronts the buffoonish figure of President Marcos. Did this dialogue ever really happen? The film – Sison himself in voice-over -- claims it did. But perhaps all too late, even the man may be uncertain about his recuperation now -- never to be embalmed for worship, never to lie in state like Uncle Ho, or his idol, Chairman Mao. Ever.
Posted by Noli Manaig at 6:47 AM