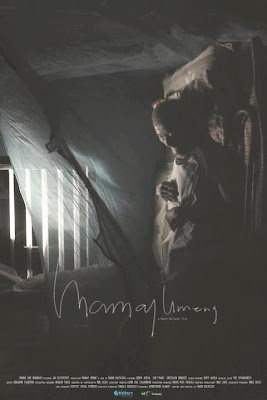 At the heart of Dwein Baltazar’s Mamay Umeng is the unflinching, unblinking gaze at the consequences of old age and its cruel slowing of time. Whereas a film like Bwakaw squeezes this similar theme for crowd pleasing moments and warm fuzzy feelings, this one stares at it warts and all, with most of the pathos withheld. There’s a defining scene here where the titular old man gazes at himself full-length in a mirror, full of folds and wrinkles, and all the narcissism and self-delusion of youth appear gone. He may have just danced with the fairest girl in town, but his illusions end there. That instant might serve as a postscript to Lacan’s idea of the so-called mirror phase, where a child at a certain point admires itself in the mirror in total libidinal misrecognition and idealization.

Death is a natural part of life, it is often parroted. It is the antithesis that plays its part in a cycle, a process. But Baltazar, a precocious young director, deromanticizes  the approach of passing, so that the seeming reminiscence of a long life can be the worst form of entrapment. The stagnation of hours, born of old age, and not the acts of man nor the elements of nature, may be the most unkind of inhumanities.

At least, it seems that way. Dwein Baltazar’s quiet and contemplative but profound first film is much-reserved and never wordy: her assured and well-tempered direction relies on observational camerawork rather than a rhetorical script in its statement about the nature of life and death. The film unfolds in a series of plans-séquences -- static, unedited long takes that are paradoxically hauntingly expressive to our captive contemplation – detailing the elderly routines and the peregrinations of the titular hero, 84 years old, whose spirit is willing and desiring, but whose mind and flesh are weakening.

However there are also moments when Mamay Umeng is like a dynamo with vast reserves of sudden will and energy. Waking up at ungodly hours, driven by unknowable rhythms, or the absence of them, he wanders far away from home, even as curiously his mysterious compass points to destinations both mystical and perspectival: towards a vanishing point? Through establishing shots that are never downsized into close-ups, we see his smallness in the scheme of things, the vastness of the sea, the breadth of paddy fields, like perhaps a diminutive figure in an ancient Chinese scroll painting.

Baltazar’s first film is recursive, cyclical and unrelieved in its observation of the seemingly inescapable routines of senescence. In scene after recurrent scene, almost always without words but sometimes not without subtle humor, we see him light votive candles to the Child Jesus, listen to soap operas on radio, and sit alone partaking of coffee or snacks or just straight solitude. Sometimes Mamay Umeng wanders through the shrubbery as though trapped in a labyrinth so that we wonder if the old man is in the grip of dementia – and how often is he guided and called back home, how he seems otherworldly lost in thought amid the bustle and play of children around him! But these are all cumulative tropes and never heaped on out of nowhere. The symbolic juxtaposition of youth and old age is unmistakable.

What complements the film’s sense of enigma is the old man’s still and stoical presence. He is often quiet, lost in thought and unaffected by solitude or noise. But in one rare moment, the most surprisingly expressive one within the film, he sings a happy song to a friend who ironically would soon be deceased. Punitive fate of aloneness, and a remembrance of his own inevitable fate yet again. Baltazar, however, can sometimes be nitpicked for youthful modesty or is it just reverence for her old protagonist that she tarnishes and blurs the all-too-revealing mirror? But we get the picture: cinema is the mise en scene of desire, the medium of scopohilia; Mamay Umeng, on the other hand, is the mise en scene of death, and perhaps ought to be taken in mediated, regulated measures.

Baltazar’s slow burn, of old age, of time’s decay, is well-observed, well-judged and patient, unfolded through compassionate framing of the old man’s physiognomy: how often a profile instead of a full-frontal close-up. Baltazar also judiciously employs synecdoche, the mirror reflecting only the lower extremities of Mamay Umeng, as if to dismantle and dehumanize the old man in his long, terrible wait. In a few great moments, this studious and already sophisticated director reminds us of the uncompromising cinema of Carlos Reygadas and Lisandro Alonso, where the wrinkled and/or ugly body tells all and yet how elevated it is to the truthfully sublime. But for someone with already such a sure touch, Baltazar should read this review with a pinch of salt.

Welcome to Philippine cinema, Dwein Baltazar!
Posted by Noli Manaig at 6:05 AM