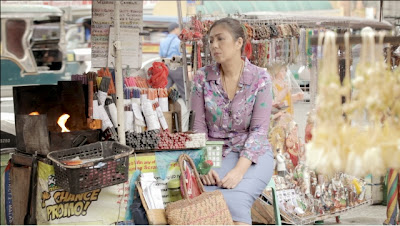 It is not an accident of portraiture that Vivian Velez has been cast, in part, for her imposing presence, broad shouldered and powerfully built with strong echoes of a once-virginal youth. She reminds one of the Madonna in Michelangelo's Pieta with its homologous exaggeration of proportion, a youngish Madonna with seemingly brawny shoulders, courageously cradling her fallen son. That Ralston Jover’s Bendor seems to have patterned Blondie, a robust and youthful grandmotherly figure, after the ageless Virgin Mary, may have validity: her efforts to appear young, for one, are indexed by her ever-changing and highlighted hairdo, her stoutish build seemingly in consonance with Michelangelo’s notion of the strong, unbowed mother who shoulders, as it were, the weight of the world.

Unlike the Virgin Mary, however, Blondie, although a  matriarch with much resilience and forbearance, is not made of incorruptible purity. In the opening sequence alone, she betrays her interpellation by the ideology of corruption. She has just assisted a quack doctor in an abortion, and the post-prandial talk, as it were, centers, with street-wisdom, on Blondie’s husband’s inept indiscretions. And this sets the stage for a downbeat and listless framing of its unprepossessing subjects and a cataloguing of a no-less depressing backdrop, a receding and detached panorama of problems besetting society. The hemorrhaging of society may not be unlike the hemorrhaging of abortion, expressed by a casual quip of the quack doctor : "It is just like having diarrhea."

At this point in the evolution of Filipino film practice, has the certain tendency towards social problems, our Third World calling card, by this instance, become all too desensitized and tedious? The “diarrhea” seems to have covered all the bases and caught up with all the modus operandi of crime and the modus vivendi of poverty detailed by the headlines. From child laborers to death squads, from drug mules to war and displacement from the South, from garbage colonies to squatter warrens, from prostitution to forced marriages, from principled desaparecidos to petty pickpockets, from corrupt politicians to unscrupulous police -- every snapshot of casualty or victim, every mug shot of criminality and pathology seems to have been taken and catalogued, every pair of red hands seems filmically identified and fingered.

With the cyclical and rhizomatic nature of social ills seemingly without solution, is the thematics and poverty aesthetics of the social problem, by now, a spent and inutile force? Yet do we have the stomach to give way to the problems of the privileged upper classes? Jover can only step back and gesture again toward the overly-examined subjects, a virtual re-establishing shot of the marginal spaces, as if we were back to square one because, after all, the other and the oppressed must speak, even if, troublingly, they point to a hopeless prognosis, a bleak metastasis of poverty and the social ills it has spawned. Bendor, a reference to the titular monger of the piecemeal purchase -- and now a sticky-fingered, two-faced version who cheats the scales or sneaks in bruised fruit -- can only itemize its response with impressionistic and cursory detail, instantiating with broad strokes what plagues the lower rungs of society.

Life in these margins is schematized between the guileful (e.g. Blondie's kind who are full of illicit enterprise) and the guileless (e.g. the garbage pickers, the street beggars) and yet the distinction seems unrecognizable. Everyone struggles. Life in these fringes has naturalized itself to the devil taking the hindmost. Criminal sleight of hand is just one option for self-preservation: through its warped logic, it can go hand-in-hand with the burning of votive candles and a devotion to graven figures, which, if it isn’t a weapon of spirit then it is a weapon of aggressive survival and criminal rationale. The rampant trading of abortive contrabands, for one -- another of Blondie's and her family's illicit piecemeal schemes -- happens at the doorstep of Quiapo Church. When the guilty are made to gather and account for their acts, they finger each other like the most virtuous, or least guilt-ridden, of souls.

The same with the seemingly toughened Blondie. Even as she recoils at the assaulting stimuli around her – e.g. the stench of roadside garbage, abortive women whom she mistreats and abandons, an extended family that is a burden to her -- Blondie's assumptions do not exalt her in the social pyramid. Life has taught her the rules of Darwinistic adaptation too well, and yet, after all the hard knocks, she is just as embattled.

Nor is she is a specific, one-off case, but just one instance of struggling subalterns with a similar fate -- a metaphor for replicates Jover culls, perhaps, from magic realism or the supernatural phenomenon of multilocation who may represent a much-needed guide or companion through life. Blondies are everywhere but each one alone, a legion hermetically sealed from assistance, Jover's images suggest. She may possess the strong shoulders to bear the brunt of problems: against a good-for-nothing husband, a musician son and his family continuously cash-strapped, an entire extended brood of dependents to feed; she may be the eyes through which we witness the degradation of society, but she herself is in the trenches, no less trapped and involved in the unstoppable rhizomatic branching out of problems that permeate society. (i.e. the social maladies are overdetermined so that solving Blondie's problems may not solve, say, the beggar's problems, and so on.)

Known for her lustful and frisky screen roles in the 1980s, Vivian Velez ‘s Blondie’s efforts at the notion of rejuvenation gives way to a tired and defeated iconography. By this time, she has gone the rounds, committing crime, enabling crime, abetting crime, eluding arrests before landing in jail. It is almost too apropos and fitting for this mother-lode of a subject to emblematically end this way -- for Blondie and perhaps a national cinema's investigation and indictment of society's hydra-headed dilemmas -- with the receding camera framing her teary-eyed hesitancy before her reopened jail cell, too weary and wary of granted freedom.

Freedom has come to mean its obverse: the yoke and harness of servitude and suffering that perhaps only a fictitious Virgin Mary can miraculously shoulder.
Posted by Noli Manaig at 8:54 AM

Email ThisBlogThis!Share to TwitterShare to FacebookShare to Pinterest
Labels: Cinema One 2013, Ralston Jover