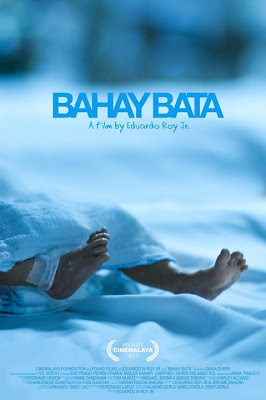 In Eduardo Roy Jr.'s Bahay Bata,  the opening sequence captures with a handheld camera much of the film's observational yet cogent message. We follow a pregnant, grimacing  woman as she makes her way toward the Fabella Hospital, a maternity hospital for the poor. A real-life subject, she proceeds without help, all the way into a waiting room crammed full with more grimacing, pregnant women. Once here, we get the robust but helpless quotidian images at the wards of the same hospital, an insitution that is overtaxed, shorthanded and bursting at the seams with the expectant, the reluctant, the newly delivered. This, in a few, succinct sequences, transmits the frontal and unembellished state of reproductive health care in the country.
The narrative of Bahay Bata coincides with the Christmas season, something that gives decided resonance to its issues surrounding the orphaned plight of health care. The strong documentary feel permeates the proceedings with the kind of immediacy found in the direct-cinema of Frederick Wiseman. But rather than dwelling on dire institutional disorder and disrepair, Bahay Bata has a more ambitious and sprawling focus. It bravely and boldly takes on many far-reaching themes: the joy and humanity of expectant women; the straitened circumstances of those who can’t pragmatically raise a child; and the measure of heroism, and the resultant struggle, of men and women of an overstretched institution; how they must make do with limited logistics while managing the thorny affairs of their own lives.
The Fabella Hospital proves to be a rich vein of indelible imagery, hence making it something of a character. There is a breathtaking establishing shot of the main maternity ward that shows the length and breadth of rampant population. Patients are arrayed in constricted spaces:  each single bed must be shared by as many patients as possible.  But instead of funereal faces and fiercely guarded communality, there is a sense of hope and new beginning. A woman who has given birth to her thirteenth child remains as  happy and doting as a first-time mother. Whenever a new mother fails to lactate, someone else among them gleefully stands in as a nursemaid to feed the hungry mouth. There is also lively talk among these unsinkable women about prizes that one might win if one luckily gives birth on Christmas day.
For some of the transients here, Fabella even represents a reprieve from more unfortunate circumstances. One of them, a mendicant without a home, dreads the prospects of raising her child out in the streets and the harsh, urban elements. She keeps bargaining for a few more days before she is discharged, until she has to make a painful decision. Another mother is in handcuffs, with a woman in uniform at her side. However cramped the spaces, however lacking some provisions, the hospital must be preferable to a life behind bars.
The irony extends to the  nurses themselves. It’s a well-known phenomenon in behavioral studies how caregivers are often the most in need of care and comfort. There is an episode here that shows how an old nurse, after receiving insulting remarks from a superior doctor for neglect of duty, walks out on her 30-year job, but not before giving the doctor a piece of her mind, and a piece of her fist. The accumulation of abuse has worn her out beyond repair. But the film’s central fiction is that of Sarah, a nurse who may look spit and polished and beyond reproach, but only deceptively so. It is she who must shoulder some hard obligations and secrets. One soon realizes why the sight of endangered, blue infants gives her a sense of vertigo. The clock is ticking on her too in a world of unwanted children.
The constant shift between semi-documentary and fiction seems to juggle many threads of material and an ensemble of characters to boot. This may give the impression that the film has taken on more themes and subjects than it can ably handle. Roy, however, builds his case little by little, episode by episode, and the ending, more catholic than Catholic, is well-earned. He has bravely but soberly weighed the state of reproductive health within the country and what he has found is a beleaguered governmental system that can’t sufficiently support society. One can almost read his mind: If he makes enemies out of it, so be it. Amen.