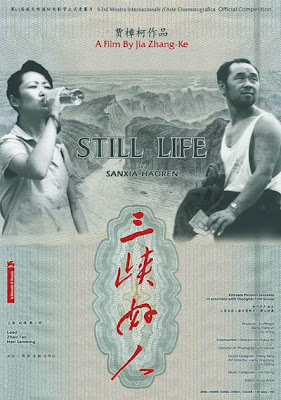 The Three Gorges Dam is indisputably an amazing human achievement, a masterwork of science and engineering. Started in 1993 and scheduled to be completed in 2008, it’s been a long grandiose dream by the progress-conscious Chinese leaders in power. All the monumental superlatives befit this megaproject that it invites comparisons to other human marvels throughout human history. The comparisons do not stop at the sheer magnificence and their positive impact, but also encompass the enormous human cost that attend their construction.The Three Gorges Dam is an awe-inspiring sight but it conceals the high price that has to be paid to make it a reality.

This is what, in essence, Still Life tries to dramatize. We are forewarned with the title. Still Life not merely denotes a genre of painting, it also connotes lifelessness, the inanimate, the stunning of life. By focusing on the literally dwarfed lives who suffer displacement and separation and are made to fight for their traditional way of life, Jia Zhang-Ke continues his faithful documentation of the common Chinese divided between their resistance to sudden and bewildering change and those who join the nation’s rush towards development and modernization.

The future is here, and it is an unstoppable juggernaut. The past – and everything attached to it, cultures, values, traditions – are doomed to be overwhelmend and submerged by the torrents of a new dam. This reality is captured in the old city of Fengjie, the film’s setting, one of the unfortunate paths for the dam, where many people’s fates hang in the balance. We witness the marking of the buildings condemned for demolition and we get poetic and naturalist images of walls crumbling down, side by side with glimpses of concretization as it starts to encroach on people’s lives. The city is divided, almost in chaos, those who take advantage of the employment the dam-building has brought, and those who will be soon displaced, divested of all imaginable property, abstract and concrete, their concepts of hearth and home. This is all for progress and the greater good – but at what price?

The human cost is dramatized in two sections of this dramatic diptych. One involves Han Sanming, a coal miner who is in search of his ex-wife and daughter whom she hasn’t seen for 10 years. Their last known address is already deep in water, no longer on the map, and Han must make a living as a demolition worker, while trying to find out the whereabouts of his lost family. His family’s story is one that will try to brook disintegration.

The second section of this film is devoted to a nurse from out of town looking for a husband who seems to have abandoned her in favor of his perpetually hectic job overseeing the demolition and reconstruction of Fengjie. These two souls might be drifing apart, a sacrifice at the altar of the Three Gorges Dam.

In Still Life, Jia’s directorial trajectory seems to be heading inexorably toward glossy artifice, notable in his latest works like The World and The Platofrm. It’s a stupefying contrast to the rough-hewn documentary-like realism of Artisan Pickpocket, his first film. But Jia’s themes and compelling way of telling his stories remain his strong suit. The only seams in Still Life are the insertions of incongruous images – U.FO.s and space shuttles, of all things – that seem to try to break the starkness of human drama or just to see if we are watching. This playful gimmickry nothwithstanding, Still Life deserves all the accolades it has received, including the 2006 Golden Lion at Venice.