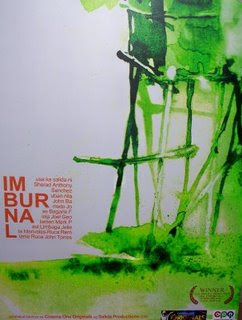 The history of cinema is the history of the tyranny of narrative films. The right of first refusal to anything worth committing to film belongs to the province of narrative films. Narrative films are what sells, here and elsewhere. Narrativization, it seems, is the handmaiden of crass commercialism. Young filmmaker Sherad Anthony Sanchez turns away from this corruption of cinematic art and kneels down at the tabernacle of the experimental. Through Imburnal, a 3-hour, 30 minute tour de force set in the sewers and shantytowns of Davao City, director Sanchez renews and defamiliarizes our received notions about what it depicts, in the process dismantling the predictable tendencies of narrative films, in the process, too, reawakening our collective conscience and consciousness. Let the wounds reopen and fester again!

What Imburnal succeeds in doing is to recompose and poeticize the ugly, the squalor and the wretchedness. In effect, the cinematic alchemy is to see the sewers in a new light. The result may not be an aesthete’s notion of a paradisiacal playground, but the sewers are not merely repositories of filth and refuse either, but afford a hideaway for its denizens. They are the last refuge and haunting places for the kids and teenagers living in the nearby slums. We don’t smell these sewers for some reason, even as the waters flowing through them aren’t pristine either.

Eschewing straight narrative, director Sanchez decides to film episodes of life in the margins as they take place in and around the sewers. The editor (Sanchez, too?) and a phalanx of cinematographers are agents of abstraction as much as the director: the camera blurs out of focus, it decenters compositions, runs on and on in lengthy takes. Editing is as defamiliarizing: freeze frames, an assortment of jolting and jarring filters, disjunctive and non-linear editing, all intertwined with simply lyrical compositions. Out of potential tabloid material, Imburnal is perhaps what we might call an instance of poetic social realism.

While Davao City is hailed by lofty honors as the safest and cleanest city in Southeast Asia, there is much squalor in the periphery. Allen and Joel, two kids who figure in Imburnal, practically think of the sewers as their second home. They play and frolic and swim there, and tom-peep the older kids fornicating in different permutations. The older kids, no older than teenagers, hang out here too. They have dead-end prospects in life; their talk centers on sex, the opposite sex, love, and the mundane. Otherwise, there are cheap vices – smokes, alcohol, improvised drugs and all – to be had.

Imburnal attests to the instinctive resiliency of life – its strange but seductive mutations – where none is expected to survive. The sewers may not represent heaven on earth, but they sometimes function as the last refuge for the young who have nowhere to go. Some of them even go to die there. Through Imburnal, Sherad Anthony Sanchez has created both a poem – an elegiac one perhaps – and a document that attest to the lives of the marginalized and the voiceless. From the depths of these sewers rises a film that can arrest us, a beautiful Baudelairean flower.

Reviewed: August 30, 2009 (Northern Portrait/The Persistence of Vision)
Posted by Noli Manaig at 6:25 AM

Email ThisBlogThis!Share to TwitterShare to FacebookShare to Pinterest
Labels: Sherad Anthony Sanchez, The Persistence of Vision