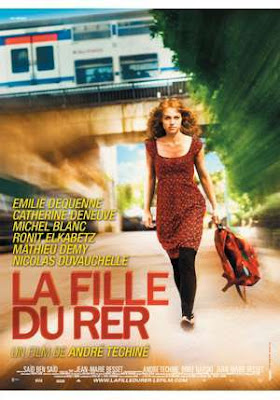 She's not all there. There's a faraway and wistful look in the eyes of young Parisienne Jeanne Fabre, and it scarcely seems to be one of aspiration. When the camera follows her around the city in Andre Techine’s The Girl on the Train, she seems to be a study of youth misspent. There is little to indicate what yearnings, or perhaps sorrows, inhabit her mind, and even when she rollerblades across the city, there is on her face, the perpetual gaze of abstraction. Taking her time to look for jobs, she mysteriously eschews the ones that answer her resume. It’s not as though she lacks her mother’s wisdom and supportive presence. Au contraire. Even when she finds love, it hardly seems enough a catalyst to awaken her from a perpetual reverie. “Learn to open your eyes,” someone soon advises her.

Based on events that made news headlines in France in July 2004, Techine’s latest film draws on the hoax perpetrated by a 23-year-old woman named Marie-Léonie Leblanc who, in an apparent effort to gain attention, claimed to have been attacked by black and Arab youths on a Parisian train. It was a hoax that touched a nerve across a country reeling from a string of anti-Semitic attacks. In The Girl on the Train, we vaguely sense the public outrage, but what is writ larger are a young woman’s ill-advised choices and her galvanization from a mysterious trance.

The Girl on the Train is structured as a diptych, two halves carrying utilitarian titles, the first half being the “Circumstances” and the second “Consequences.” Far from assuming a documentary approach, Techine lenses his material with the same poetic sensibility and delicacy that grace his previous mature work (The Thieves, The Wild Reeds, My Favorite Season). “Circumstances” traces the fictionalized moments of Jeanne’s life that might help explain why she committed the hoax. What essentially unravels her is the repudiation by her boyfriend, a promising Olympian wrestler who is faced with a lengthy prison sentence because of her. “Consequences” encapsulates the moments after the hoax, the gathering together of Jeanne’s suddenly extended family, her mother and mother’s friends – mainly a Jewish lawyer and his family whom Jeanne involves in her hoax – to let her see the error of her ways. It is the adolescent Nathan, the young grandson of Bleistein, who sees through her, a kindred spirit.

The young Belgian actress, Émilie Dequenne, who played the down-and-out working class girl in the Dardenne Brothers’ Rosetta, essays enigmatic yearnings to perfection as the eponymous character. Catherine Deneuve, as Jeanne’s mother, is a strong but unobtrusive presence, ready to enlist everyone’s help and swallow her pride to see her child through. Michel Blanc, as the Jewish lawyer Bleistein, is a strong ballast who shrewdly knows the bigger picture borne out of the consequences.

Throughout Techine’s film runs a recurrent motif that reveals one of its inspirations: the musical theme to Godard’s Vivre Sa Vie. Both films, true enough, are unconventional character studies of young, embattled women. While Nana in Godard’s film meets with a fatalistic and perhaps cynical end, a prostitute’s cold-blooded death, however, Jeanne is not beyond redemption. The Girl on the Train professes, as in many previous Techine pictures, the power of familial bonds. Love redeems, and it cuts across all barriers.

Not as evidently strong and coherent as Techine’s masterpieces (The Wild Reeds, My Favorite Season), The Girl on the Train is a work that makes more sense with retroactive appreciation. It’s a film that hints and suggests as much as tells its story. If nothing else, it yet again confirms the filmmaker’s fascination with women, a long-standing one borne out in more than three decades of filmmaking. The Bad Girl, Strayed, The Thieves, and The Bronte Sisters are pictures that foreground the subjectivity of women, a subjectivity that paradoxically avoids eliciting facile judgments. Here lies the strange redemptive power of Andre Techine’s brand of cinema.