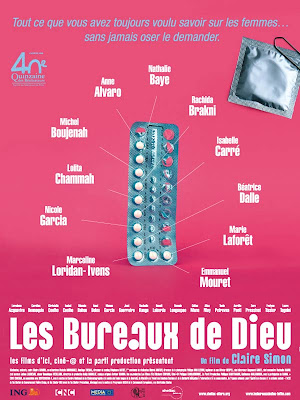 It’s OK. No one knows us here, a teenage girl reassures another in the opening sequences of Claire Simon’s felicitously titled God’s Offices. They stand restlessly on a balcony of an abortion clinic cum family planning center in the heart of an unnamed French city, moments away from taking their turn with a social worker. As the film unfolds along the fine lines between documentary and fiction, this troubled teen will pass through a revolving door of women, women of all ages and walks of life, as they receive all manner of help, from simple advice and assistance to life-altering succor about matters of sex and the repercussions of sex. Whether referring to this halfway house for women or the conceiving womb, God’s Offices depicts a humane though often painful portrait of women.

Drawing on research material she and her team gathered between 2000 and 2007, Claire Simon crafts a story -- nay, a series of stories -- that hews close to sessions recorded at a host of family planning centers across France, sessions unified by an inherently confessional tone and themes that would otherwise have been kept in the dark. As befits the material, the film is captured in cinema-verite fashion (not too overly shaky and intrusive, however), and a supplemental authenticity is added by a cast of first-time actresses playing the beleaguered women. It’s an inspired stroke of casting that the social workers are played by well-known veteran actresses of French cinema, including Beatrice Dalle and Nathalia Baye. They provide the compassionate presence and the voice of reason through an often tense and disconsolate film, a presence more subtly empathic and empathetic than what non-professional actors might be able to portray.

God’s Offices, if nothing else, puts forward a whole spectrum of sad and tragic human stories from the vantage point of women. Through highly detailed and informative accounts, one gets the sure sense that women take the brunt of sexual relationships. Anxiety from delayed periods. The pill. Abortifacients. Pregnancy. Abortion. The wrath of families and the whole social stigma of unwanted pregnancy and motherhood. The few men who figure in this film are angry, demanding and impatient figures, and the men who figure in the women's narrations are no more scrupled. This series of episodes channels one exhausting psychic outpouring. But in a film that features only one half of the gender divide, we are merely getting one side of the story, however honest and genuine the accounts are made to be.

The thrust of the film is, unswervingly, the story of women. With an almost unvarying emotional pitch, it plays out a dozen or so slices of women's life in a 2-hour duration. There is the young teenage girl at the film’s opening asking simply about contraception behind her parents’ back. A more distraught and tearful episode features the confession of an impregnated woman caught between a husband and a lover who turns to blackmail in order to bed her down repeatedly. Another confession reveals a woman, who for years has suspected her own sterility, suddenly getting on the way. How? Everything comes full circle at the end, when a middle-aged Bulgarian prostitute is asked why she keeps getting pregnant with the same man. There is but one answer wafting through the corridors of God’s offices: Love. A picture that foregrounds abortion and its convenient rationale, God's Offices intimates, at film's end, that most noble of human emotions and motivations. Nothing should be unwanted and tainted, not the wages of love.

Reviewed: June 6, 2010 (Northern Portrait/The Persistence of Vision)
Posted by Noli Manaig at 5:53 AM