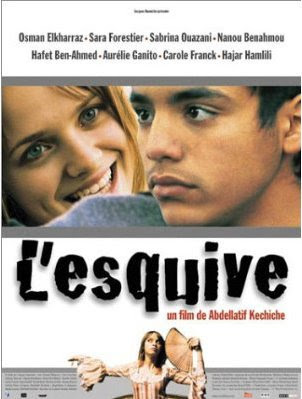 I remember the civil tremors that rocked Paris and other major suburbs across France in October and November 2005. They would be televised to us from half a world away in the form of harrowing, post-apocalyptic images on the evening news. Shots of burning cars and public buildings, scenes of youths fighting pitch battles with riot police—all still linger in my mind. They marked a social upheaval that recalled the uprisings of May 1968 and prompted fears of government overthrow. It all seems to have stemmed from the deadly electrocution of two minority teenagers perceived to have been caused by brutal police persecution. It dredged up and brought to the fore decades of long-simmering resentment by marginalized masses, mainly North Africans and other émigrés, who had suffered from racism and xenophobia.

Abdel Kechiche’s L’Esquive, shot almost prophetically in 2003, paints the grim picture in one of the disenfranchised housing projects where many of the minorities have been relegated. This film depicts life at the periphery, the brutalized conditions of the ghettos arising from state neglect and public paranoia. In French, esquive is a sporting term that refers to a sidestep. In Kechiche’s film, it is about Muslim teenagers learning to navigate the everyday dangers of the banlieues. Shot properly in cinema-verite style – in the manner of Raymond Depardon and Frederick Wiseman – L’Esquive is a documentary of adversity and resiliency disguised as fiction, capturing graphically the pent-up and misplaced energies of its young subjects. It is equally made memorable and resonant by the naturalistic performances of its ensemble cast: all of them seem to be non-professionals playing their own lives.

At the film’s center is the budding young love between Krimo, an inarticulate hood, and Lydia, a glib, indomitable theatre actress. But we know the prospects of romance here seem false and out of place, they may not be forthcoming, and yet we are glad that this film is not about extreme displays of violence either. We don’t even mind that all of the characters seem to be screaming at the top of their lungs each time they speak. (It seems to be the norm: even friends engage each other in these seemingly uncivil ways). There are no death tolls mounting here, but this is a film that paradoxically conveys its points subtly: we know at the end who will most likely live less-than-peaceful destinies and those who will execute the appropriate esquive. What L’Esquive captures instead is the tough-as-grits explosion of language. At every turn, there is the prospect of heated altercation.

This is Kechiche’s sense of proxy violence, his fiery brand of pacifism and diplomacy: rage and anger transmuted and expressed in words. Krimo’s father is behind bars and is only mentioned in passing. We know that Krimo is in a gang, too, but all we witness of him is his brooding ways, his often funny inability to articulate his thoughts and feelings. Much of the violence happens offscreen: Kechiche insulates us from its easy spectacle. It is enough to pit his characters in the dialectics of the streets for us to get a sense of their unsettled, unnerving lives. They snarl like lions; their voices growl; and their idiom is not fit for the faint-hearted. And yet they are not afraid to laugh and cry, to express their fears and their hesitations.

The best that L’Esquive offers to the viewer is the value of sublimation. Characters like Lydia and her ‘homeys’ devote their all to the theatre and at film’s end, there is a sense of their assimilation of social skills that will help them integrate into wider society. Lydia in particular goes around in a period costume – her comfort, escapist blanket? – in order to internalize her role in a Marivaux play. It is enough to intrigue Krimo, who drops his old girlfriend and tries his hand at acting. But as the drama professor points out the thesis to Marivaux’s Triumph of Love: the much-hardened, much-brutalized Krimo is too much a product of a violent upbringing to take on the role of the harlequin. And yet like the-once-diffident Lydia, Krimo would stand an even chance of redemption if he just kept at it long enough. If he just kept at it long enough.

L’Esquive won 4 Cesar Awards in 2005, including one for Best Film.

Reviewed: June 3, 2009 (Northern Portrait/The Persistence of Vision)
Posted by Noli Manaig at 6:36 AM