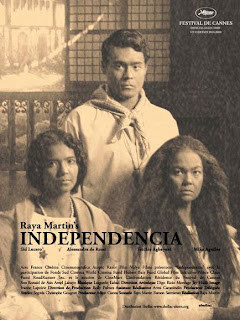 For, with a strong indigenous cultural life, foreign
domination cannot be sure of its perpetuation.
-- Amilcar Cabral


Everyone of us is channeling Americans. For over a hundred years now, we have imitated and internalized their smallest tics and their thickest twang; we aren’t called Little Brown Americans for nothing. Our assimilation of all things American is there to see – though perhaps too self-evident to notice. We eat Kentucky Friend Chicken and McDonald’s burgers and wash them down with swigs of Pepsi or Coca-Cola. We wear the latest shoes from Nike and listen to the latest songs by American Idols. We watch the latest movies churned out by Hollywood, starring our favorite state-side actors. These are our everyday realities. We are, in truth, not as independent as the history books would like us to believe; we are living in the shadow of these insidiously neo-colonial times.


Raya Martin’s Independencia, making its Philippine premiere on Independence Day ironically in a French film festival, may not espouse up-in-arms revolution (how, when the enemy is within us?) but delivers a subtly nativist message: the Filipino should endeavor to rediscover his pre-colonial roots. It’s the first small step in his long journey towards recovering true independence. Set in the early 1900s and onwards, Independencia avoids, perhaps by default, the grandiosely-scripted and astronomically budgeted depiction of an epical and heroic era: the American occupation. Instead, writer-director Raya Martin astutely focuses on common folks, non-comnbatants: a mother (Tetchie Agbayani) and her son (Sid Lucero) who flee to the forest as soon as the threat of war encroaches on their town.

Here, in this forest, reality seems refracted through a strangely allegorical and magical prism. Birds dart out of the bushes like shimmering bullets; breezes blow unceasingly; ferns and palm fronds sway and bend; a stream ripples and flows through it. In the conversations that will transpire within its bosom, this forest will be alluded to as the object of greed, and two towns go to war for it. This is where mother and son seek refuge. Soon (no one knows the nature of time here) they are joined by a woman (Alessandra de Rossi) who has been raped by American soldiers. In due time, she gives birth to a fair-skinned child.


Independencia, however, is not about a family’s insularity. What this retreat from the outside world ultimately means is a symbolic return to the Filipino’s bedrock strength, a revalorization of his indigenous culture, his pre-colonial past. Within this film’s family, the oral tradition of myths, proverbs, legends and general folklore, is reenacted and passed down from one generation to another. Talk of talismans, giant wild boars, and the aswang circulate among this family in the woods. And the realities in the forest – e.g. the son finding his way home only after turning his shirt inside out, the appearance of wood spirits – don’t seem to contradict what this family partakes in.

Not unlike South American and other Third World writers employing magic realism in their works, Martin harnesses the inherently surreal/fantastical aspects of our folklore in order to mirror the under-emphasized and misrepresented aspects of our culture. Circulated in the deep of the night, circulated during meals, the stories exchanged in the depths of the forest are a kind of nourishment, a defense mechanism that both diverts and fortifies.

And yet in Independencia, Martin has fashioned out one of his least confounding and more accessible films to date. Independencia is not unlike a well-told legend: there are moments of facile objective reality combined with moments that ask us to suspend disbelief. Much of Martin’s unconventional and unpredictable narrative techniques are becoming familiar to us, it seems. He has also decided to meet his audience halfway: much of the counter-intuitive filmmaking we’ve seen in movies like Autohystoria and Now Showing is kept to a minimum. (But perhaps these are just the strictures of this particular film – to be displaced by the stylistic demands of the next film.) Instead of unknowns and non-professionals, he casts well-known, professional actors for this, and they invariably deliver.

Conceived as the second entry in Raya Martin’s cycle of films set during periods of national struggle (A Short Film About the Indio Nacional being the first), Independencia may not mention America once in any of the film’s dialogue but its pernicious presence, its colonizing threat, is palpable. There is a newsreel-like sequence at midpoint of Independencia that brings this home: an actual atrocity by American soldiers shooting a boy suspected of pilfering is reported in quasi-provincial, faux-American accent. The film finesses its point with humor. There are no strident anti-American slogans here. That the American atrocity mirrors what happens in a 1976 film (Lupita Aquino-Kashiwahara's Minsa’y Isang Gamu Gamo), only seems to suggest the currency of the Americans’ unchangingly contemptuous, subhuman regard for Filipinos.

In this light, Independencia can be seen a sophisticated post-colonial film and Raya Martin, at least in this instance, a veritable post-colonial filmmaker. Making a virtue of meager funding from European institutions (in particular, the IFFR’s Hubert Bals Fund in 2007), he uses unconventional and postmodern approaches to film Independencia. Noteworthy is his reliance on distanciation techniques, which puts the stamp of its real post-modern provenance on the film. This film, shot in black and white by Jeanne Lapoirie, may look like an early 20th century American movie, but it is unmistakably a product of its time. Independencia is a living, breathing film: its colonial discourse is not restricted to the past, but remains as valid as ever. Hence, the tell-tale markers like the theatrical acting and theatrical dialogue, the unnaturally thick make-ups, the hybrid sets (a fusion of natural, live elements and handpainted backdrops brought to life by production designer Rodrigo Ricio), characters talking straight to the camera, the effect of film seemingly running out of its reel are not unjustified instances. The presence of White Leghorns – a variety of poultry not introduced to the Philippines until 1950 – in a film that is supposed to be set during the American era also tells us of the timelessness of the issues problematized by this film.

Independencia concludes, empathically, in the most unambiguous terms possible. Orphaned and alone, the fair-skinned boy (Mika Aguilos), whose outward Caucasian appearance might be a potentially symbolic vector of cultural syncretism between the colonizer and colonized, enacts the supreme gesture of self-determination. Pursued by American soldiers deep in the forest, the boy makes sure of signifying his true allegiances. His realization of who he is and where he belongs, paints the sky in different shades of brown. This is, after all, the brown man’s world -- his beloved country. Long live the Filipino!

Reviewed: June 18, 2009 (Northern Portrait/The Persistence of Vision)
Posted by Noli Manaig at 6:41 AM