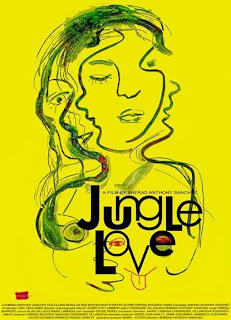 The jungle is obscene.   -- Werner Herzog

The jungle is all about our dreams, our deepest emotions, our nightmares. It is not just a location, it is a state of our mind. It has almost human qualities... The question I asked myself when first confronted by the jungle was ' How can I use this terrain to portray landscapes of the mind?'

The jungle leads us beyond social and cultural codes, to a state of nature where humans must confront themselves to find themselves. Society increasingly makes us forget our inner lives and concentrate on the outer ones.

-- Apichatpong Weerasethakul,
nicknamed "The Sergei Eisenstein of the Jungle"


In Apichatpong's work, the jungle is a radically different world, populated by spirits, mysterious beings, and half-animals. It is the realm of dreams, the non-rational, of secrets and desires. Whoever enters it leaves the safe communal space of the town or home and faces the unknown.”


Both the complex paradigms of the forest stemming from the Occident (the German Herzog) and the Orient (the Thai Weerasethakul) converge and conflate in Sherad Anthony Sanchez’s Jungle Love: the psychological and phenomenological (Herzog) coexist with the patently mystical and animistical (Weerasethakul), the stark vision of nightmare (Herzog) sits alongside the elusive but graspable notion of the sanctuary (Weerasethakul), the speculum of the immanent and imaginary (Herzog) juxtaposes with the robust transcendence of the supernatural (Weerasethakul). And still Sanchez thrives in its interstices and repurposes the jungle for socio-economic, religious and political usages. Everything happens and yet integrates closely together in Sanchez's version of the jungle.

Despite its supposed inviolability and sacrality in our culture, here the jungle is a playground, but one with a mind of its own, too. In it, we find a pair of young lovers from the city blithely lost and searching for a tribe in its midst, all the while using its landscapes for sexual relief. They taunt and torment their native guide with carnal innuendos and his temptations soon start to burgeon. About to cross their paths is a middle-aged woman, who sexually scorned by a younger married man, steals his child, and escapes through the jungle. Left momentarily alone, the infant in her possession mysteriously disappears into thin air. Meanwhile, a detail of army men undertake drills and training and take a swim in a nearby river. While there, one of them becomes enchanted by an invisible entity in the midst of the jungle.

Harnessing the frameworks on the jungle articulated by jungle-crazed directors like Herzog and Weerasethakul, Sherad Sanchez incorporates into his film a cross-pollination of all those ideas and translates them into a hybrid both imitative and yet original. As in Herzog's Aguirre, The Wrath of God, Jungle Love is all about “our dreams and deepest nightmares.” As in Weerasethakul's Uncle Boonmee Who Can Recall Past Lives, Sanchez's jungle teems with “spirits and mysterious beings.” These presences are self-evident and hinted at here. As in the Thai auteur's Tropical Malady, Jungle Love is an escape from “social and cultural codes,” as evidenced by the free love that reigns in its midst.

What sets apart Sherad Sanchez’s Jungle Love, on the surface, is a light, unfreighted tonality and mood -- one of ludic and playful impishness and mischief that refreshingly distinguishes its vision from the often portentous, sombre and humorless approach of other filmmakers trying to condense the mysteries of the jungle. This can be ascribed, for one, to Sanchez's flippant treatment of all the denizens of this jungle, both tourists and transients, on one hand, and the resident spirits and the lost tribe, on the other.

Almost to a man, the characters in Jungle Love seem obliviously trapped or ensconced in the maze of the jungle so that they never appear grim nor do they angle for sympathy. While the old woman seems distraught over losing the baby, her condition does not prove pitiful. While the urbanites may forever go in circles beyond anyone's help, they aren’t tragic: we may even see their vanishing as just deserts for their desecration and carnalization of their surroundings. When an army man receives pleasuring from an invisible jungle spirit, the sight of orgasm is not off-putting nor perverse. When we get a glimpse of the tribe, they are a collection of fertility goddesses, with big, ample bosoms, bathed in prismatic colors.

Sanchez strikes all the right notes -- no apparent grace notes at all -- and all the right chords to impart the film's effects, affects and sensations. Jungle Love is fingerprinted with a lightness of touch, and an even-handed, never over-the-top sense of the magical and mysterious. This moderation of that sense of the off-kilter is reinforced by a sparing and well-placed use of stylized details (a color filter or two, and how about the singing motley crew with animal masks who materialize at well-timed moments?). The soundtrack is also a keeper, keeping everything on the upbeat with humorous levity. The main theme is a pop song blaring from the radio with lyrics that go “Jesus loves you... ‘Mama Mary loves you.” Infectious.

So infectious is this insistent religious refrain that it starts to hint at a prevailing state of sin, accompanied by the possibility of redemption: it is not hard to imagine the locale of Jungle Love as a halfway point for its oversexed and wayward characters. A concept of purgatory hasn't been this much fun, but Jungle Love is indeed littered with clues of uncertain liminality. Now and again are images of limbo bordering on nightmare or hell: there are close-ups of the infant-stealing woman looking on with anguish, then the indiscriminate couplings, the sexual debauchery, and the sudden transmogrification of characters from one form to another. This is not paradise yet.

More than a reimagining of purgatory, or an altered state of supernatural enchantment, Jungle Love posits a nation beset with our more immediate, more worldly and more concrete nightmares. Remember that Sanchez's magnum opus, Imburnal, is no harmless experimental film about nothing: a seemingly tangential yet haunting portrait of those who live in the fetid fringes of Davao City. Not dissimilar, not too far-fetched, Jungle Love stakes its claim as a political allegory about a country in the thrall of powerful forces -- where sex is a sinful opiate of the masses, where the urban rich flaunt their arrogance and indulge their pleasures, where nightmares are the currency, where only the military forces experience a guiltless, rejuvenating sense of jouissance. This could be the spitting image of a Christian Third World country, a kind of banana republic. Neither Herzog nor Weerasethakul could have visualized and conceived such an analogy. Sherad Anthony Sanchez’s Jungle Love is one fun and memorable romp through the great unknown that is the primeval forest as something we have inhabited all along. This, our jungle, is obscene.
Posted by Noli Manaig at 12:01 AM