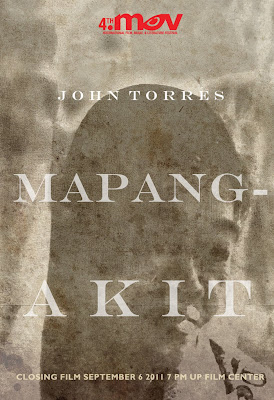 As a child, John Torres was a shy and timid figure. Rather than play and mix with kids his age, he kept himself at a respectful distance. Rather than join and converse with them, he would remain just close enough to read their speaking lips. This way, Torres would listen in, and from the few words and phrases picked up, he would reconstruct conversations and devise his own stories. That's how, Torres reveals, his instinct for narrative got an early start and has been honed ever since. From his first feature film, Todo Todo Teros, onwards, this affinity for spinning tales has served the filmmaker in good stead.
In his fourth feature to date, "a long short film” that runs at roughly 40 minutes, Torres again regales us with his lip-reading abilities. Mapang-akit puts words in the mouths of villagers in Laruja, Antique, as it were, and delivers a story populated by aswangs and elementals. The result is a hauntingly arresting work, mysterious in its resonances of folklore, and often idyllic in its portrait of the ways of life in a sleepy village.
The story, in the fictive matrix of Torres, is spare, but ingenious. It concerns an unassimilated settler named Anita, an elderly woman from Negros suspected of being an aswang. Her otherworldly beauty, her dispassion in men, and her seemingly uncanny good fortune are all taken against her. The death of a villager named Milo, the suitor of a certain Elena from Negros, a supposed relative of Anita, only serves to fuel the rumors. Though it is simplicity itself, such a story has remained strong for a long, long time, a residue of regionalism once encouraged to serve colonial rule.
The beguiling beauty of Mapang-akit lies in its almost ethnographic regard for the sleepy village the filmmakers used as location and how it is dreamily shot. Because Torres’s co-cinematographer, Che Villanueva, happened to be shooting in familiar territory – the village of her relatives – the camerawork radiates a presence akin to that of a villager: total and unobtrusive. There are few, if any, self-conscious stares at the camera. In turn, the camera takes in everything and follows around the villagers in their laidback chores and activities: un-husking coconuts, partaking of afternoon popsicles, conversing about the dead.
A little bit of controversy now hounds Torres after the revelation of his aesthetic style of inventing dialogue, how anthropologically and even legally it may violate the moral rights of his unwitting cast, how his methods might verge on exploitation, more so in the light of his admission that consent of his subjects was not obtained as to how the filmed material would be put to use. It must be said, however, that Mapang-akit is fiction, and although it had its origins in documentary, it is now beyond actuality. Even documentaries, it bears noting, are not immune to artistic latitude: they are, not uncommonly, staged and fictionalized. Nanook never took exception to recreations of bygone practices like seal and walrus fishing. In documentaries like Land of Silence and Darkness (1971), it is well-known how Werner Herzog made up lines for his willing, smiling subjects. Cinema, it bears repeating, is a dream factory, a fiction factory.


John Torres writes to clarify an ambiguous portion in my review, regarding where consent of his subjects was obtained, and not obtained:
"I had their (the villagers) consent to shoot from up close and at a distance for a film that we were making. They weren't made to act so maybe for them and for others, this would mean it's a straight-up documentary based on process.
It ends up another creature, with them speaking different lines. I don't have their consent when I heard things beyond the words they spoke, but I'm excited to go back and show them the film."
My response:
I have revised the unclarity. When I said "consent of the subjects was never obtained" I did intend to mean how it is worded now: that the villagers were not informed of the fictive treatment the filmed footages would undergo. I was writing from the point of view of someone who might find this problematic. But that is not my own position: I refute the issue subsequently from my own perspective as someone who thinks it is verging on the preposterous to criminalize authorial freedom. It simply goes against the whole idea of art as a whole.
John is by no means a fly-by-night artist: He has expressed willingness to return to Antique and show his film to the village where he shot Mapang-akit.
It is intriguing how the village will react to the finished film, but I have a feeling their response will be one of happy amusement. Gone are the days when cameras stole souls.
Posted by Noli Manaig at 9:44 AM