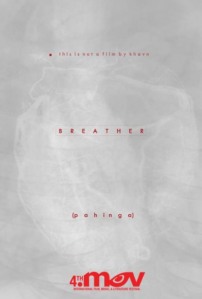 A filial tribute. A tone poem. A meditation on life and death. Breather stands as one of Khavn de la Cruz's most virtuosic works to date, commendable in the way it works on so many levels.

As a piece of portrait, it is a touching ode to Leonardo de la Cruz, the filmmaker’s late father, dead earlier this year of lung cancer at the age of 65. What is noteworthy is how Khavn has distilled the memory of his father, as it were, barely two months after the latter's demise. As a personal meditation, Breather is dark but not unrelieved by poetry on the mysteries of life, existence and mortality. As an artistic statement, Breather invites to be read as a furtive declaration of fatigue setting in. After 31 feature films in 12 hyperproductive years of film practice, Khavn, too, needs some breathing space.
Breather, however, belies this. It is hyperkinetic filmmaking, a mash-up of sound, image and poetry. Edited chaotically and mosaically, it allegorizes the mindscape, the thought processes, of a man trying to reconcile himself to life and its inexplicable mysteries. This man, his father and the world around them seem to embody distinct life principles. His father appears to represent the joy of life despite adversity. His words and his manner caught by Khavn’s handheld camera lack the bitterness of someone about to die. Staring at the imminent death of his father, Khavn is the opposite – inconsolable, all gloom and doom. The world is not stopping for either of them in its inexorable cycle of life.

Through a recitation of poetry, however, Khavn tries to find some kind of solace and sublimation. This enables him to hedge on his private grief by concealment in the poetry of others. Not one continuous text, the poetry has the effect of disjunction and fragmentation. Intoned by the filmmaker in voice-over, the verses seem inspired disparately, written by different authors. From time to time, a line of relevant verse pops out – something that has to do with the dark nature of existence, angst, bitterness, gloom – but we never stitch them together into one fabric. The important thing for the filmmaker, it seems, is to convey a dark tonality.
The most memorable passages of Breather-- the heart and the rock, as it were -- remain the footages featuring the father. Grace defines him. He dances in the teeth of death, literally. It takes a noble character to allow himself to be documented while he struggles for breath and sustains apparent pain; it takes a gracious father to be asked by his son with probing but groping questions. If Khavn hides behind poetry, the father is plainspoken. If Khavn uses his camera not just to document, but as a crutch to approach the father, the father, very composed and calm, is eloquent and obliging. This way, even though Khavn began to shoot belatedly, a month before the father’s eventual death, Breather succeeds at its portraiture. This limited time, however, meant a limited perspective: a hagiographic one.
Perhaps it all begins and ends with one word: bereavement. When the father is out of the frame, it is unmistakable elegy. The screen seems one cauldron of visual noise, the images fragment, blur, and superimpose on one another. When faces and music of friends and family bubble up, they are almost hallucinatory, celebratory. Life goes on, despite grief. As Khavn wraps up his 31st film in a dozen years, Breather seems to represent a gravitation to chaos, a seeming antithesis at a crucial point of his film practice. Where does Khavn go from here? What next? The man alone has the answer.The years are young; his horror vacui will fill the void in his life with worthy things soon enough.


Tagalog title: Pahinga
Posted by Noli Manaig at 8:03 AM