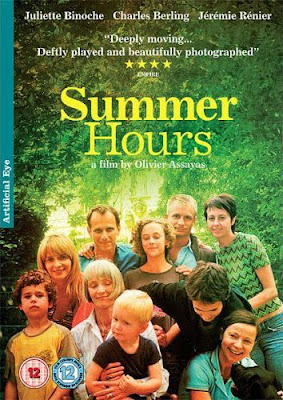 Birdsong. Emerald green trees, lush verdant undergrowth. Dogs playfully bounding in the glistening grass. You can hear them breathlessly panting. Children hunt and search, heartily and boisterously, for hidden treasures among the boughs. These opening images in Olivier Assayas’s latest film Summer Hours set a lyrical tone for the luminosity that follows. We are in the middle of the Marly estate in the French countryside, as Helene, the matriarch, celebrates her 75 th birthday. Everyone who matters is present: Helene’s two sons, Frederic and Jeremie, and lone daughter, Adrienne, and their children, despite their hectic, cosmopolitan lives. Alone with her eldest son, Frederic, however, Helene is leaving instructions and the contents of her last will and testament.

These are no idle premonitions. True enough, Helene soon passes away before the end of summer. Her last will is most needed to sort out inheritances, a considerable one that includes her collection of antique furniture, paintings and books. Her former lover happened to be Paul Berthier, a painter of some renown. Helene had rightly foreseen what would happen, taking into account her children's different circumstances, the different lives they lead. While Frederic wishes to keep the summer house and its contents intact, Jeremie and Adrienne, both industrial executives based in different countries, see no need for it. Jeremie, in fact, is in dire need of money to buy a house in his adopted China; Adrienne may have to live much of the time in Japan.

Here is a scenario that would in lesser hands be fraught with melodramatic possibilities and histrionics. But Olivier Assayas’s film keeps emotionalism within acceptable levels, not only achieving a film of assured pathos but parlays his premise into a statement not just about the Marly family but about each one of us, each human being. And as it makes its humanistic statement, it offers a gentle reproach to the inexorable march of civilization. Summer Hours is not so much about family intramurals as it is about the recognition of each one's birthright to live according to a personal compass.

There is what we might call a sweet dynamic among the Marly siblings. To make his point, Assayas never overplays the angle of fraternal civility, leaving only little, automatic gestures as shorthand for respect and reverence. No words necessary, the gestures are reflexive and heartfelt. Much of the differences among them is made elliptical.

Summer Hours, more aptly, ranges over generational contrasts, between Helene and her children, and in the last act of the film, between Frederic and his teenage daughter, Sylvie. Too preoccupied with the matters of the family estate, Frederic is jolted when he finds out Sylvie’s adolescent indiscretions. Shoplifting. Smoking pot. Sexual initiation. The father may be furious but to borrow a phrase from Godard, this is her life to live. Yet surprisingly Frederic subsequently consents to what might be seen as a desecration: Sylvie throwing a party for her friends in the auctioned summer house. Perhaps it's just as well. After all, these, too, are her summer hours.

The history of civilization has been notable for its production and preservation of cultural artifacts. Assayas’ film, which features rich imagery of the auction of art treasures and family heirlooms and the interiors of museums, may never refute that, but it postulates each person’s inalienable heritage: Nothing takes more privilege than the individual, the human welfare. Let each one explore the height and latitude of summer -- those too-few, too-brief summers.