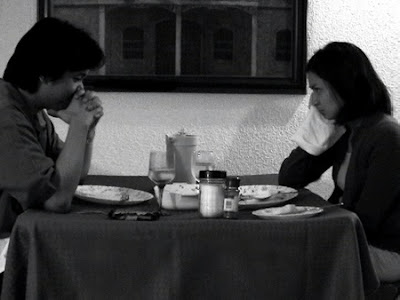 Within the framework of the huis-clos hangs, with obsessive recurrence, the cinematic corpus of Jan Philippe Carpio. As much as any other director might prefer to be identified with works of cosmic scope and significance, Carpio favors a more circumscribed premise: the closed doors, where characters are scathingly and powerlessly entrapped and pitted against each other. In Balay Daku (2002), his early masterpiece, Carpio foregrounded a hacienda full of inimical and inescapable bedfellows. In Tako, a short film about old flames threshing out their relationship at a despedida party, the premises could just as well be a phone booth.

Call it an affinity with the likes of John Cassavetes or Nobuhiro Suwa (M/Other comes to mind), call it a nod to Bunuel's hellish mise-en-scenes (The Exterminating Angel comes to mind), Carpio has often gravitated towards this strain of chamber drama, lean and spare, ever attuned to Sartre and his notion of the unbearable. The conflicts Carpio probes and examines are not so much materialist as they are metaphysical no-exits – as such, more irresolvable, and more harrowing, versions of hell.

Hilo (2007), Carpio’s third full length film, further distills Carpio's fascination with the claustrophobia of the closed doors. Structured as a triptych, it charts the deadlocked relationship of two lovers, revolving around an unsettled and oft-interrupted dinner that runs the gamut of emotions, everything from nervous laughter to teary-eyed reticence.

Emerson and Jenny are, on the surface, regular lovers. Little indicates they are ill-matched. A salient point, however, is the fact that the man is a professor, while the woman is a student, which might explain certain dynamics between the two. Three almost identical episodes compose Hilo, slightly different from one another only in their gradual addition of detail and the growing tone of fatigue. The setting is a  dining table -- that hallowed place which imposes civility on the proceedings. Consequently, the couple hem and haw, approach and circle their issues with much trembling energy and much awkward aside. Speech bears a lot of informational withholdings, skirts a lot of verbal taboo. Voices trail off, murmur and sing to themselves, the objects of their predicates are missing, their pronouns refer to unknown antecedents. The problem is "it." But there is much misplaced laughter, that crutch of silent spaces and improvisatory dead air, almost to shatter the fourth wall for us.

Hell is other people, Sartre once declared. But Carpio is not as misanthropic nor hell-bent on passing judgment. With Brechtian mannerisms and a withholding of the true bugaboos bewitching the characters, Hilo keeps us at a respectful distance, our perspective bearing witness to the effects rather than the causes of the couple's impasse. Instead this dramatic aloofness, one suspects, serves to fetishize gentility – that of the ever-shifting mirage of civility, a bourgeois strain of which Carpio observes and sometimes subverts in Balay Daku. We suspect the truth about Emerson and Jenny, but there are enough gestural fakes and feints to throw us off; all we are certain of seeing are bits and pieces, like so many fragments and facets of a cubist painting.


Describing his oeuvre as a succession of “momentaries,” Carpio emphasizes the instantaneousness of his films, their shimmer that we briefly glimpse. Call them snapshots, quick cross sections, or slices of life, Carpio seems solely intent to present points in a continuum, a mere thread in a bigger tapestry, all meant to preclude easy, conventional conceptions about his body of narratives and character construction.

With the bareness and minimalism of a Dogme 95 setting – a table for two, a half-full dish of pasta, and spoons and forks that Emerson and Jenny toy self-consciously with – Hilo funnels our attentions to its two actors and their curious dynamic that manages to engage our empathy. Sympathy,  on the other hand, is made elusive by distanciation. Meanwhile the improvisational work of the two actors, Jenny Logico and Emerson Sanchez, is commendable. Carpio is not unlike a Prospero who sets a basic premise into motion for his protagonists to extemporize and enflesh its ontological bare bones.

True to the implications of Carpio’s conceptual idée fixe, Hilo  concludes in a kind of impasse, the problems as insoluble as ever. Things are back to square one, and somehow different. For, without exactly knowing why, we have undergone the brunt of emotional and psychical attrition, only guessing at the unknown wellsprings of the couple's problems. Without realizing it, we have come full circle: The couple is dead! Long live the couple!
Posted by Noli Manaig at 9:20 AM