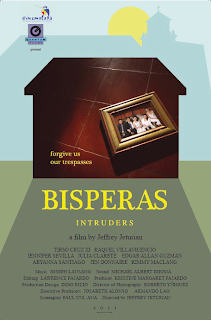 The scenario is the night before Christmas, in a parish like any other. Gathered to observe the religious ritual of panunuluyan, however, the parishioners are not without disparate distractions. Discernible are all sorts of subtle body language – lusftul glances, shifty eyes, listless faces – that betray oblivious attendance. Minds and souls are elsewhere. Among the gathered flock is the Aguinaldo family, a family that seems for the most part devotedly observant. But appearances deceive.
When the Aguinaldo family comes home to a burglarized dwelling, a Pandora’s box is suddenly sprang open. Discovering what valuables are missing, suspicions and recriminations start to creep into speech. When important land titles are unaccounted for, mother and one of her daughters suspect not the burglars but one among them, the father -- a lay minister but an inveterate gambler. When the son is questioned by investigators, he reveals the disappearance of an envelope full of money entrusted to him. There seems to be sibling animosity too – between the feckless son and the ever-questioning daughter. Another daughter, a balikbayan with young daughter in tow, is also made to account for her lack of familial duty, how the green-card-holder never fulfilled her vow to become the family’s provider.


In its claustrorphboic mise-en-scene, Bisperas draws on a distinctly Bunuelian conceit: the burglarized home littered with damaged belongings and contentious relationships is like the tense and gutted upper-class home in The Exterminating Angel. No escape, no exit. We are trapped as helplessly as the characters, forced to be confronted by familiar characters and plausible circumstances. Tact, in time, gives way to bared fangs. Everyone goes at each other’s throat.
Jeturian's subjects – Roman Catholics and middle class types – are quintessentially Bunuelian, too. Not one without the other. False pieties – attributable to both socio-sectarian denominations – are unmasked. Practiced rituals are exposed for what they are – empty, hollow gestures that condemn and mark the guilty as socio-religious ciphers. Jeturian draws on tendencies we already know: the Filipino penchance for tense and surcharged confrontations. Even so, there is a level of equanimity that attends sentiment. For all its emotional bloodletting, Bisperas does not feel overtaxing or cringe-worthy.
Bisperas, indeed, goes straight for our complacencies, our holy of holies. Christmas deconstructed, as it were. Jeturian continues to question social pretensions, what we hold with reverence, those who walk among us with sanctimony. But while Tuhog satirized the lack of ethics of filmmakers, Bisperas has a broader scope that will earn him adversaries. Gamely, Jeturian proves up to the task. Through modest aesthetics, a stripped-down setting and shadowy photography, he has tackled his monolithic themes head-on, with a film idiom that may no longer be novel but remains potently bracing.

The epilogue is as intriguing as it seems proper, something that, in a roundabout way, cements the themes of Bisperas: Jeturian makes us wonder how the other half lives. On Christmas day, we get a glimpse of them attending mass in their Sunday best, smiling their avuncular smiles, giving away money with the largesse of those they robbed from. Those they mimic. Those they want to be like.
Posted by Noli Manaig at 10:50 AM