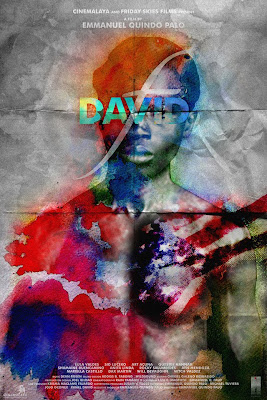 David F is short for David Fagen, the mythic and speculative omnipresence in Emmanuel Quindo Palo’s second feature film. What is underscored in his makeup is his skin color: stigmatic black. To enact his sadly unchanging and unvarying fate for more than a century starting with American colonization, David Fagen is also depicted as a series of kindred, if not related, namesakes. He is not just the fictional present-day David, a gay stand-up comedian working the Pampanga nightclubs who is made aware of his roots and thus initiates a search for his African-American father. His earliest known ancestor, it turns out, is a historical figure, a member of the Buffalo Regiment -- troops composed of African Americans, eight-thousand strong, deployed in 1901 here, America's new but restive colony. Palo’s film, though, is not merely a speculative chronicle of the historical David Fagen and his fictionalized descendants but a painful intimation of the unofficial history of African Americans who chose to strike roots in this country.

The search for David Fagen is not a happy one but one that uncovers raw wounds of rootlessness and voicelessness. Although proud alterity and resilience can serve as the proper antidote, the world postulated here remains one that is mediated by strong exclusions and prejudices. As Palo envisions him, the actual (but imagined) David Fagen is one of the Buffalo soldiers who deserts his ranks after witnessing the subhuman regard of White Americans towards Filipinos, and defects to the local revolutionaries. Even as he rises to a respectable rank of captain among the Philippine Army and marries a native lass, there remains a thankless regard for the colored man. The price on his head only tempts betrayals against him, an undervaluation of his contribution of solidarity to the Filipino cause. Later on, he fathers a girl named Elena who is born with dark skin and is incapable of speech. Elena marries a guerilla during the Second World War, and gives birth to a dark-skinned boy, who is promptly disowned because of suspicions over her chastity and the circumstance of the child's black features.

To White America, we are the Other, the inferior race. To White America, however, so are the African Americans. In David F., worse, our co-option by this colonial mindset is evident as if to deserve our stature as the "noble savage." Thus the Filipino, to position himself in a respectable pecking order, is guilty of othering the black man, too -- a manifestation of the jaundiced outlook persistent to this day. A sense of homelessness is what the African American faces wherever he finds himself in a Westernized territory. Among us, he stands as a casualty of our imaginary which has absorbed not just American education but a pervasive Western thinking. We remain in the thick of taking out our frustrations on our minorities due to prolonged colonialism that once branded us as “indio” and “salvaje.” There are shades of that in Palo’s film, a parallel mentality that is articulated as in a scene where among part-Filipinos and other "hyphenated" nationalities, David Fagen is cussed as a “nigger.” As he finds out about his past and his heritage through the help of a sympathetic man of a similar ethnicity, he begins to become more sensitized to issues of identity, e.g. the racially insulting stand-up routines committed at his expense. David F. is a reminder that the question of race remains regrettably unresolved in contemporary times. If we think that our race feels the brunt of American prejudice and oppression, we too have long been co-opted by their thinking.

Predicated on his first two films, Palo demonstrates a shrewd and complex film practice. He is a master at simultaneous and subtle representation that might misdirect us, a sly feint where to shepherd our attentions and sympathies. Is David Fagen of contemporary Pampanga not just a victim of the so-called incorrect skin color but partly that of his sexuality or perhaps his job that exposes him to irreverence? An over-determination keeps us on the backfoot. Another moment that is loaded and telling is when the dark-skinned Elena fleeing with her child, abandoned by her husband and his family, crosses paths with a family of Aetas; on a sudden, the element of human appearances almost makes us second-guess with Elena. We seem to ask the same question: If the Malay-descended natives disown her, is her proper world with the one that mirrors her and her child in likeness? This social stratification hints at the the levels of hierarchy that segment our society, now and then. Similarly, Sta. Nina operates on this double bind: Pol is a kind of heretic who, after revealing his true colors, repudiates his profane acts, and aspires for the sacred. Palo employs a kind of doublespeak -- a sleight of hand in which we think we know where the object is hidden, but where Palo has subtly, discreetly emptied both -- for us to keep on second-guessing.

The only detail of irony and regret is the decision to use "blackface" makeup for the character of Elena. Blackface makeup has been historically associated with the elimination and effacement of black actors/performers from American cinema and entertainment. With the abundance of part-Filipinos in this film, were there no suitable actresses to play the role of someone with both Filipino and African-American descent? Otherwise, one wonders how the striking logistics (both period and contemporary) for this film has been put together ed on a shoestring budget.
Posted by Noli Manaig at 9:30 AM