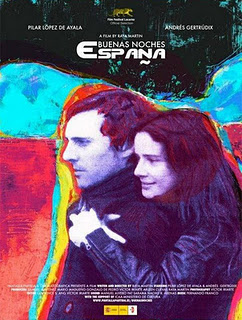 Has Spain ever left us? Today, more than a century removed from our country's declared independence, Raya Martin’s latest film, Buenas Noches, Espana, seems to prompt such a question. From all indications, Martin appears unsure of a definite answer, unconvinced of a clean break. Implicit in the film's title seems a fervent wish: a valedictory with some finality. And yet Spain, it seems, is in his heart: proof positive is how he is sojourning in that country, enjoying its hospitalities, and primed to produce another film with a Spanish cast.

Understanding the tenor of Martin’s previous films, however, we take it to be no benign vacation: contemporary Spain remains a fertile hunting ground for artifacts and documents relevant to our nation. In our minds, Martin is not unlike a late 19th-century ilustrado travelling through Spain and the continent, picking up pieces of Filipino heritage, and evidence against our old colonial masters. True enough, in Buenas Noches, Martin’s own personal archaeology while in Spain has yielded a startling find, a find that, sadly, many viewers never get to see in the aftermath of their decision to damn the film and walk out on it.

Buenas Noches may not be an easy film to sit through, but it justifies its devices. This film hinges on the mysteries of physics and those of altered states; and Martin never discourages such a notion: the film’s characters, he hints, may be high on hallucinogenic drugs. What else to expect when he takes a news item about an instance of teleportation in 1593 (one where a Filipino soldier vanishes in Manila and materializes in Mexico City), then soups up that gizmo of science fiction and passes it off as a wholesale possibility? Thus, all amped up, and all doped up if you will, Martin proceeds to blindside us with the postcolonial thrust evident in his previous films.

From Autohystoria (2007) to Maicling Pelicula Nang Ysang Indio Nacional (2005) to Independencia (2009), Martin has been engaged on a mission of dredging up and retrieving our colonial past. That has meant everything from reconstructing the lay of the land in 1896 to doing a diachronic depiction of Filipino culture circa American times. This time Buenas Noches reveals more about our present-day cultural relations with Spain than anything else, something that might seemingly involve more diplomatically palatable facets of geopolitics, but still puts into perspective how much – or how little – has changed between the two countries.

To show all this, Buenas Noches engages in untutored filmmaking. Almost spitefully, it offers no plot, no narrative, no dialogue, no exposition, no characterization, no budget: merely perhaps the capital of charm to sign up the services of two well-known Spanish actors (one is Pilar Lopez de Ayala, known for her work on Guerin’s In The City of Sylvia). What is in great abundance here are eyeball-gouging process shots, like tinted, superimposed, overexposed images, the better to underscore the atmosphere of hallucination. What is also in great abundance is the wall of sound on the soundtrack: a grating reverberation of electric guitars, looping percussions, industrial and mechanical noise. Then like canned accompaniments to punch-lines, there is music from old Hollywood cartoon shows, the better to highlight the pranks of a pair of teleporting lovers at the center of the film.

Still, of these teleporters, we know precious little. This kind of minimalism paradoxically adds to the mystery of their identities. Their journeys are even more meaningful, showing up everywhere with perfected spatial travel, visiting Spain and presumably its various colonies like Mexico and our own country. Teleportation, it seems, is that proximity borne out of colonialism. But this is all a prelude to a visit to the Museum of Fine Arts in Bilbao, which, at first, they turn into a playground, unleashing themselves like refugees from Godard’s Bande A Part.

Levity, however, turns to tearful solemnity when they stumble on a sad reality: a clutch of Juan Luna paintings languishing in some neglected rack in the museum. Locked away in these institutional walls, they are too far removed to make a voice. The Spoliarium was returned to us on a whim. Will these lesser-known paintings in Bilbao suffer the same fate? For so long, we seem to be incapable of recovering parts of our patrimony that have been withheld from us not only by Spain, but by American and Japanese colonizers. This is our postcolonial condition.

But while this might be key to finding the intent of this film, is it the key to gleaning a narrative and understanding the film as a whole? The dubious have a point. Still the unusual interweaving between these two possible threads, and the red herring that this film represents for the purposes of archaeology, are beguiling and absorbing enough to recommend it to the viewer. History is never too simple, after all. Spain is in the heart, and not in the heart, and the infinite gradations in between.
Posted by Noli Manaig at 10:26 AM