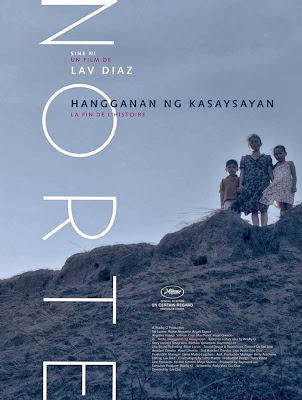 As far as Lav Diaz remains the capable puppeteer pulling his strings, Fabian Viduya serves as the director's vitriolic mouthpiece, the bitter voice of commentary spouting a deeply rotten state of things rooted in a deeply flawed history and a pseudo-scientific society, this time as filtered through the self-destructive philosophies of the West. Inhabiting Norte's narrative, Fabian is a powder keg, a loose cannon ready to explode. Anyone versed enough in Western critical thought and philosophy may discern how he spouts contradictions that try to evade, but only betray, an entrapment in dangerous thinking, whether it subscribes to the specters of postmodernism or something else, one that's bound to end in grief and tragedy.

Fabian foresees a "Zero Society," a scenario, presumably, after the end of history, the end of ideology, where infinite pluralism and pandemonium reign, symptomatic of a widespread but faulty appreciation of postmodernism. To counteract this apocalyptic belief that anything goes, Fabian proposes the elimination of "what is wrong," but what is wrong to his mind is even more all-encompassing: his very own family, his unscrupulous usurer, his feckless self, anything that may represent evil. Thus what is right may be a question mark given the near totalization of what is wrong. What seems to loom large and imminent before him is the ideology of capitalism, which he observes and suffers on a daily basis. Otherwise his position seems overdetermined by the abstractions of theories and the burdens of imagination, never as utopian as what he may envisage in his dark den of books.

As Norte's discursive context, the choice of postmodernism and other pseudo-sciences such as religion is well-calculated. As an ideology, postmodernism is no longer as peremptory and relevant as it used to. Perhaps, for instance, Fabian should even be glad that European hegemony and the European grands recits are over and done with. Decentering or delimiting the meta-narratives of the West will allow us to cultivate our own national narrative, or retrieve our own glorious past. Instead, Fabian is caught up in a personal dialectic with himself: he seems to see no redeeming value in finishing his studies, none in Magda the usurer who lends at an exorbitant interest, none in his rich, capitalist sister despite her willingness to set him up for life, and perhaps none at all in himself if he fails to bring about the fruition of his notions of a utopian scheme of things. To the discursive puppet, Fabian, hostage to Western aporia, it all seems to hinge upon the outright negation of what is wrong, what is rhizomatically evil, a solution that is purely theoretical, doctrinaire, easier said than done.

What is most striking about Norte, then, in the context of depiction and discourse, is its embodiment of a Filipino protagonist in a radically foreign, postmodern mold -- distinct from the voiceless subalterns and the oppressed that dominate our present cinematic lore. Postmodernism is nothing new as an aesthetic and stylistic methodology, favored for a while by such filmmakers as Raya Martin (e.g. anti-narrativity,auto-referentiality and so on), but Norte's novelty lies in its unique central character: a postmodern creature, a Cartesian ego, depicted in an extreme crisis of self-awareness and contradiction. Postmodernism is a European discourse and yet here we encounter its tendencies lurking among us in ways that recall a Bruno Dumont or a Michael Haneke film. Reexamining it with scrutiny, however, will bear the writer-director out. For one Diaz sharpens his end-of-history thematics with the flipside of millenarian euphorics – made more pronounced and conscious by Diaz's references to Mayan and Filipino-cult doomsday scenarios. Fabian’s psychological meltdown is not just the product of conceptual cooptation by Westernized learning but also of cultural and sublunary complexities that encompass us in the idea of an actual end of times.

Fabian's flawed vision may foresee the world's imminent collapse, but his thinking remains not ahead of the times but behind it. European postmodernism does not signal the world's end since it has since been undercut by such schools of thought as Third Culture, Post-Theory or Post-Criticism, and Cognitivism. European continental philosophy is now just one of many available philosophies, no longer the monolithic arbiter of critical or philosophical thought. If Fabian had exerted himself enough in his studies, he would have been spared the ill effects of defective perspective and ideology. Perhaps even spared committing the same ghastly murders as detailed in Dostoevsky's Crime and Punishment. (But of course, it will be said, that's the film's very point, a variation on Dostoevsky's novel.)

Norte is not, however, a mere portrait of addled intellectuality and the lunacy born out of it. Norte may be Diaz's stern reproach of the West itself – how its ideas and ideals have corrupted us and the rest of the world. (On the other hand, Norte itself, as a film product, might be an act of gratitude, a catering to the liberal West, especially Europe, where many of Lav Diaz's masterworks during the last decade have been feted, have found home and have made their screening debuts.) Norte itself is a classical movie (in its enshrined binary opposition, however, it may be viewed as structuralist and thus anti-humanist as well) but timeless in pitting good and evil in all their complicated antinomy and dynamic. While the murderous Fabian represents someone who deludedly thinks he is ridding the world of the evil of capitalism, his reverse is the classical, martyr-like (if perhaps fatalistic) Joaquin Atillano, an inherently good man, seemingly too ironically good, who gets convicted and jailed for the crimes Fabian has committed.

As a kind of Filipino everyman, Joaquin Atillano answers his trials and tribulations by dint of virtue. In prison, Joaquin does not become the hardened and brutalized human being; instead, it seems to bring out the most noble deeds in him. Even when distance and absence separate him from his family for years, he steadfastly remains rooted in goodness. He is a living, breathing transcendence: in his dreams, he journeys in astral travels and visits his family in faraway Ilocos. Tarkovskian shades of our own paranormal and mystical phenomena take place here. This is Diaz’s roundabout conviction made manifest -- the reciprocal of Fabian’s warped unconscious -- that in spite of the distinct presence of evil in the world, Diaz still puts faith in the tenacity and uprightness of man. Postmodernism and other insidious ideologies may confound us, but Diaz will not leave this up to the perils and deadlocks of such a discourse, only to the identifiable contrast of evil against which to put virtue in true relief. (Does Joaquin seem to simulate virtue? Certainly not.) If the world is inexorably approaching the apocalypse, man must persist -- despite the prospects of extinction and dissolution -- in transcendent goodness.

Title in English: Norte, The End of History
Posted by Noli Manaig at 2:24 AM