HOW TO DISAPPEAR COMPLETELY (Raya Martin, 2013) 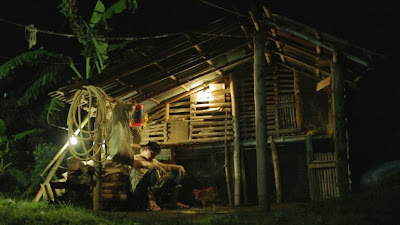 Two distinct ways to read Raya Martin’s How To Disappear Completely. One interpretation suggests that out of sheer despair Martin has gone out of his brilliant mind, all but berserk in foretelling a turbulent disintegration of our nation from within, toppled from rickety historical foundations, well beyond salvation from the clutches of Western religion and neo-colonialism. For much of Martin's young but extensive filmography, he has undertaken a de facto revolutionary project against the lingering constructs of colonialism, to the point of intimating an affinity with and cathexis to pre-colonial nativism. However, here he appears in despair in projecting his cinematic enterprise in a losing struggle. The other interpretation is more palatable, more heroic, more acceptable conscience-wise, but not untouched with a kind of extreme subject positioning in a counter cinema that envisions a confrontational revolt against what is keeping us in insidious shackles. Take your pick: Martin either as a doomsaying visionary resigned to predicting and foreseeing a social meltdown, or as a a steadfast quixotic but terrifying foot soldier -- how we've come to know him -- still flailing away at the enemy's windmills.

Through a youngster's perspective, an instance of the faux-naif vantage that can survey difficult themes with suspended, defamiliarized judgment, Martin demonstrates the extreme possibilities of social dissolution and revolution, seeing matters through the viewpoint of an adolescent girl who is gradually inculcated and traumatized by her parent's Westernized imaginary, shaped by societal institutions founded on Spanish Catholicism and American mythos and materialism. At the symbolic turning point, her mother thus instills fear in her: “Your way home is not as safe as you might think.” This might represent the incipience of her adolescent awakening but this coincides with a realization of all her socio-historical vulnerabilities, and by extension an entire nation and its posterity's susceptibilities. This is the metaphorical stage that makes her chillingly hear and see things in and out of the unconscious. Not just a possibly imagined metaphor, but this also points out the metonymy that puts her in close proximity to the real, actual dangers her mother symbolically describes: the man with a rifle in the forest, the labyrinth-like navigability of this milieu, her father’s incestuous attentions.

Negotiating this nosedive from childhood's Apollonian idyll and order to Dionysian disquiet and chaos of a budding pubescent is handled through the film’s systematicity of suspense, through hyper-stylized visual and aural designs. Aurally, with a pulsating electronic bass and beat, or with the hum of menacing fluorescence, or with the eerie chirp of cicadas that shades into technological buzz, the young girl’s fears are indexed in the present and all their modern complications. The strategic elision of sound is also bewildering, seemingly laden with dark secrets and just as suspenseful in what it withholds from us. This soundscape is coupled with a no less aggressive optical approach, how things appear eerily out of focus, how phantoms seem to appear in the mirror or flit across someone's field of vision, to say nothing of the girl's psychosexual dreams. Here the visual aspects oscillate between the impressionistic and the expressionistic: the former with what is roughcast and deliberately made out of focus, phantasmatic or hallucinatory in their echoes, slowed down to frame-by-frame commitment to memory of suggestive horror, and the latter with its ritualized, religious images filtered in red, pig entrails marinating in blood.

Martin’s visionary prediction seems bleak and pessimistic if his double-edged imagery may be resolved and clarified.  However, he also allows for the possibility of a genuine nullification of many of our ghosts in the dialectic he proposes. For one he sees a chaos of ideologies that may cancel out each other in a process of self-regeneration that will bode well for our future, but whether this is an overture for a symbiosis of absorbed cultures is at cross purposes with Martin's apparent nativism (e.g. how the central character lost in a fearsome forest uses the guidance of folklore and finds her way home is a motif used before in Martin's earlier work, Independencia.)

How the warring ideologies symbolically engage each other represents the film's most allegorically indelible, if chilling, imagery. This climaxes in the symbolic burning and desecration of cruciforms that suggest an awakening from spiritual, or perhaps historical, passivity. Who are these rampaging figures, however, at the forefront of these subversive acts of irreligion? Here, a teenage girl who takes armed revolt against her defective ancestry, and there, a bunch of skateboarding thugs, leaving behind a destructive aftermath in a cemetery, raping schoolchildren in sight. These images, while powerful, may work to infantilize and downgrade their greater ideological mettle into a seeming outburst of rebellious teen spirit. Yet, from one politicized film to the next, Martin has assumed a deliberate faux-naif perspective, a child-like vantage that disguises its venomous discourse. If not, perhaps this reading is all too literal, the title's self-terminating act. Perhaps Martin is not as disillusioned as that may imply. Perhaps if anything Martin is grounded in the miraculous present, how he frames counter reality with irony, making current for us symptoms of periodization, anachronistic yet relevant: how we remain the opposite of the cinematic figures he has experimentally depicted, how although passive we are not so addled, how not yet irredeemably rooted in psychosis, how from this fucked-up historico-ontological matrix not yet emerged as Western-style mass murderers and serial killers.
Posted by Noli Manaig at 9:29 AM