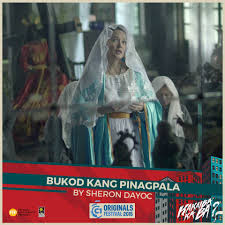 He awakens her, a religious devotee, from a vegetative sleep, a long-standing coma. He heals her of paralysis, festering bed sores and all, and then soon he is ravishing her in her sleep and whispering commands in her ears. Is he the real thing or some opportunistic being in sheep’s clothing? In this religious horror mystery, questions like this are asked to make us doubt our received pieties of many centuries. In this, it tries to be polemical, but in this, for better or worse, it is unsure of conviction. That, and ammunition.

It is little we haven’t heard of before, no matter how this entity in question looks like Jesus Christ according to Davinci: dark beard, a crown of thorns, and flowing hair like a Nazarenite. No, no matter how the house under seeming possession seems like a gallery of religious European artifacts, like some symbolism emanating all the way from the Quattrocento. The proceedings are as breakable as the house’s statuary.

Of course Roman Catholicism as European/Spain’s religious legacy is the target here. But Dayoc’s new film -- something atypical of his previous work -- falls short even in its portentousness: the biblical rhetoric spouted all throughout is rehashed and regrettably underwritten – to think that three heads share screenplay credits. Many of the lines sound like trite expressions of damnation cut and pasted from some unlettered forum or message board. Sure, they may be read as symptoms of postcolonial malaise, but little is done with this chestnut that is imaginatively new. It is almost already everyday stuff. To find someone answering to the name of God or something just as bizarre, you need only to peruse the news about our religious cults or the strange characters coming out of the woodwork during election season.

Despite this film’s efforts to make itself controversial and polemical, the script is lackluster, unsubstantial, miserably wanting. The polemic it foists on us feels uneven, unsure about how to achieve the demonization of Christianity while floating the possibility that the whole shebang isn’t of divine inspiration at all. It plugs in worn-out biblical symbolism – a dove here, a serpent there – to keep us guessing. But it just comes off playing safe, too calculated and too medieval. Its real target is thinly veiled, after all, whether he shifts shape as a succubus or as flesh and blood.
In a country where the excesses and pitfalls of (false) devotion and religiosity are quite apparent – even movies have depicted this skepticism from Bernal's Himala onwards – this is not uncharted territory anymore. So much so that films -- like Miss Bulalacao, another competition entry -- have widened their scope to include extraterrestrial intervention and determinism in man’s affairs. Not that I approve of it. It’s just one deus-ex-machina for another.

For better or for worse, Bukod Kang Pinagpala’s stabs at horrifying us away from religion, in the end, are attended with laughter and tittering. No one was into it. No one in the audience was. Not the actors and actresses with their empty, worn-out lines, and half-hearted performances. Not even the subtitlists were in the know. At times the captions refer to the supernatural figure with reverential capitalized pronouns, sometimes that’s out of the window. Pity, it seems as if Dayoc was trying to do a Kleist or a Bunuel, but the latter’s humor and irony, for one, are nowhere in sight. From a familiar and therefore challenging premise, the film isn’t equal to it, but only gives way to profane reactions for the wrong reasons.